Pchian claims to be a blockchain project with built-in support for multichain applications. This makes it possible to use a wide variety of applications. The authors’ ambitions extend to becoming a scalable, interoperable next-generation solution. It seems to unite the solutions of Aion and Zilliqa with the addition of side chains. Side chains are becoming more popular. This mechanism is already used by Lisk, Ardor and Rootstock. The point is that tokens from one blockchain can be secure used in another, completely separate blockchain. But if necessary, they can be returned. The original chain is the mainchain. Those that are allowed to conduct transactions with its tokens – side chains. As a result, the main chain overload will be prevented. This will increase scalability and accelerate transactions. 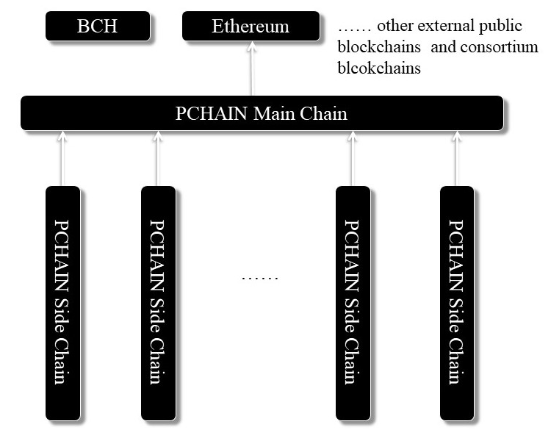 PCHAIN provides also the first multi-channel solution that is compatible with the virtual machine Ethereum (EVM).

Another interesting feature of PCHAIN is sharding. This technique is used, for example, in Zilliqa, and will be implemented in Ethereum (Casper), which is still under development. Sharding will allow you to separate nodes and transactions into smaller groups. Then more transactions can be validated at once. Only nodes will have to store certain segments of the block.

Finally, PCHAIN not only solves scalability problems, but also a problem of compatibility. It offers cross-chain functionality for a wide range of public blockchains.  And they provide comprehensive solutions for compatibility, such as Polkadot and Aion. This may prove to be a successful solution for the compatibility, which China is waiting for.

The team is headed by the undoubted star of the Chinese market, Dr. Feng Cao (Jeff Cao). He is known as a person with a lot of experience in the blockchain sector. He is the author of the first international patent on blockchain from China and co-founder of the most influential blockchain alliance in China, ChinaLedger. The author of many publications, of course.

The team also has other cool specialists: masters and professors of computer science, experts in the blockchain, with experience in such international companies as SAP and IBM.

The list of partners looks very impressive. And this despite the fact that the ICO has not yet started. Among them Chinaledger, the Harvard innovation lab, the World Wide Web Consortium (W3C) and the University of Queensland (Australia).

Chinaledger is not only the leading blockchain for the Chinese financial sector, but it also cooperates with the government on the subject of blockchain. And this promises PCHAIN support of the Chinese government in the future.

Also among the partners is  China Federation of Logistics and Purchasing (CFLP). The Federation is engaged in the development of the logistics sector and is influenced in the areas of public procurement and supply. This is also important for the project in the future.

The blockchain industry in China is on the rise. A huge number of projects are being created, such as Matrix, Sharder (with a great hidden potential, observers say), Internet Node token and Elastos. But the most important competitor of PCHAIN, perhaps – NEO. It is ahead of PCHAIN in terms of development and user base. But the battle is not lost, everything can be changed. The low base effect (low market capitalization) speaks in favor of PCHAIN in terms of opportunities for growth.

-October 2018 (7 months): The development of the core, which supports the system of accounting and deployment of the smart contract, will be completed, White Paper will be published. Testing the mainchain in testnet mode starts.

-March 2019 (12 months). Publication of the product in the main network. Completion of the external API and wiki (interoperability).

-September 2019 (18 months): Presentation of several projects of blockchain applications for founding a blockchain alliance on the graph of knowledge.

In favor of the PCHAIN project says demand in the Chinese market, a solid team, led by an influential and recognized leader.

The innovation of the project also impresses due to interoperability, scaling and other techniques, such as sharding.

Relations with government bodies are very important. This promises support in the future, and very significant.

A low capitalization at the start ($ 25 million) compared with similar projects – a pledge of great growth.

There is no prototype – even in six months before testing.

There is no heated interest in the West (hype). Although this is not so bad, it may appear closer to the ICO.

Crypto-currencies in China are banned so far, so …

PCHAIN, apparently – is a very promising project. In any case, it deserves to look at it closely. It is not excluded that it  will be an influential player in the  blockchain ecosphere.