Metronome is the world’s first cross-blockchain cryptocurrency, making decentralization possible and delivering institutional-class endurance. It is stated that MET is designed “to be used for the next 100 years and beyond”. The authors are really confident about that because of some significant features such as:

Additionally – a smart system of descending price auction is suggested for token distribution. If you’re in a hurry – you lose. Is it enough to make huge hype around that token that some experts have titled as bull rally on bearish market?

“Metronome builds off the lessons learned from previous cryptocurrencies and optimizes for self-governance, long-term reliability, and maximum portability. Built by leading figures in the space and supported by a diverse array of partners and advisors, Metronome is engineered to meet and exceed the high standards of the cryptocurrency community”.

That’s may be TRUE. With some, even long lasting – period of history of cryptosphere development the project that accumulate all – or most of – achievements, with smart guys team and advisors – have to be born one day.

“As the first cryptocurrency capable of being exported and imported across chains, Metronome will be initially issued on Ethereum with Ethereum Classic, Rootstock on Bitcoin, and Qtum support expected to follow. Such portability will allow users to select the chain that suits their requirements for management and security, or even upgrade the MET contract if needed. Metronome’s main goal is to be a built to last cryptocurrency, and portability furthers this goal by freeing Metronome from the fate of any one chain. Metronome will not be controlled by any party after launch—not even its authors—as it is completely autonomous. Metronome authors plan to continue to help by building an ongoing open-source community to support developers and users, but Metronome authors will have no access or control after the initial auction”.

Desideratum! Such crypto currency is awaited for a time!

Sounds as TRUE. The ability to export Metronome from the initial ‘genesis’ chain launched by its authors, and import to follow-on upgrades released – by its authors or other parties – based on the voluntary consensus of the MET holder community provides an opportunity for both immutable contracts, and a fair distributed mechanism to upgrade those contracts as the market matures. While market demands greatly exceeds supply, and the real-world price of the original MET rises beyond what is profitable for merchants, some could agree to fork the MET supply with a new MET contract on the same or different chains, by exporting funds they control to the new fork. These dynamics have the potential to remove risk token supply chart, as new immutable MET contracts can have upgraded token supply chart for greater commercial use.

By the way there are 4 smart contracts comprise Metronome:

As for that clever and unusual thin – “descending price auction” – this is not a trap for novices, just be carefull.

“How forks and movement to new chains impact the MET token supply curve and issuance is an open question to the Metronome community” – said the authors.

But it is more significant and unpredictable thing – MET generating is not limited – as it is with other coins. Remember, The Bitcoin community places high value on the immutability of Bitcoin’s 21 million currency supply limit, and the immutability of the issuance schedule. Litecoin (LTC) is patterned after Bitcoin, Zcash (ZEC) behaves similarly. And so on. It is stated that Metronome takes the lessons learned from these digital currencies and the result is a cryptocurrency designed for institutional-level endurance with issuance, governance, and reliability as the leading principles in its architecture. It is 100% autonomous with no undue influence from authors to further the design goal of self-governance. Metronome is predictable and mints new MET at a predictable rate, which makes it stable. 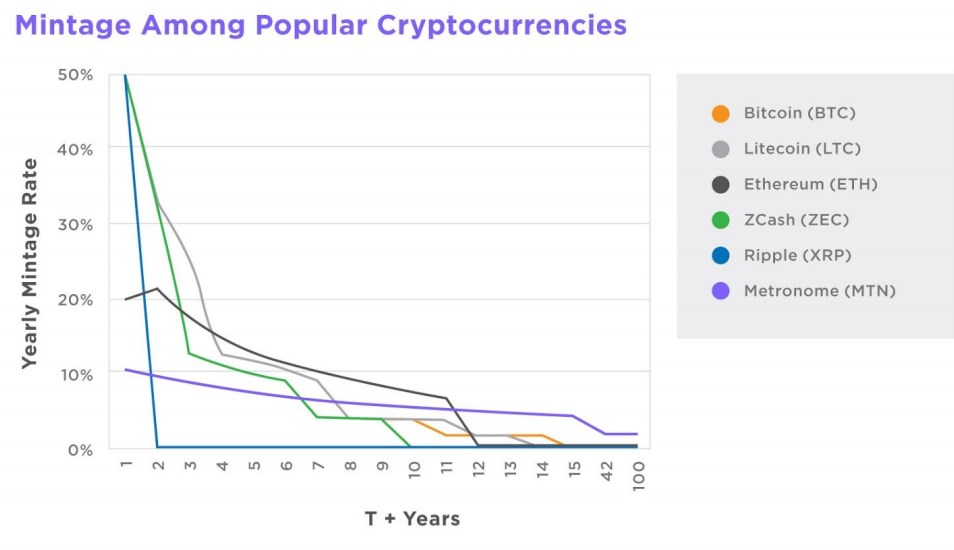 But is it really so? Seems to be again “an open question to the Metronome community”.

So – what’s distilled from all of that? And by the – what about the team as the main component of any crypto project?

The team is Okay.

Jordan Kruger – Data Scientist she is from Bloq too (Director of Research and Operations).

A board of Advisors is impressive too.

But if to look now at the projects – there are some contras too.

Ideas are all in the air. It means – some projects aimed on cross-blockchain will appear soon. And some appeared already (ArcBlock, Qtum, Aion). Which one will be chosen by crypto community – no one could predict.

And at last – how it will be affect on MET price that it is not limited for generation? You most likely know – how.

Seems MET hype is justified at some time interval. And by the way – the Road map at the moment ends by Q3 2018 with “First cross-chain launch on ETC”.

And icing on the cake: returns since ICO is near 3x (token sale ended on June 25).