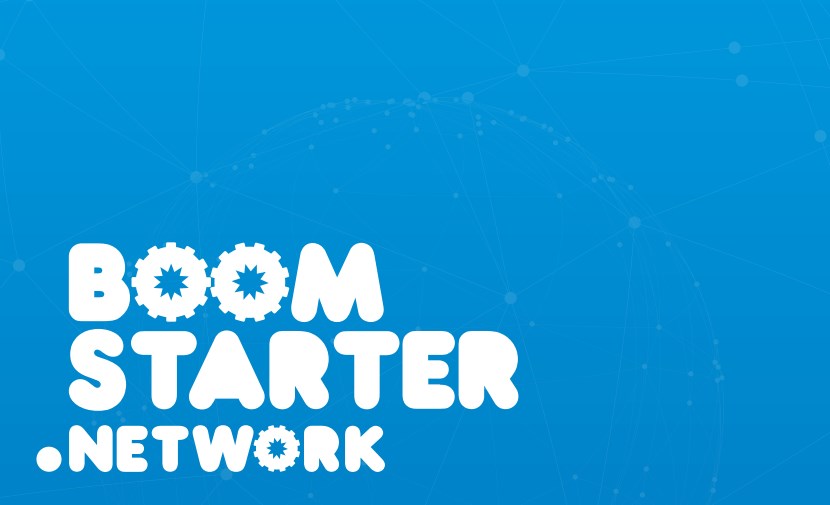 ICO or crowdfunding? Boomstarter offers and justifies its solution.

So far, only 22 countries have been able to launch a fund-raising project without a representative on Kickstarter, 24 countries – from IndieGoGo. Boomstarter sets an ambitious goal – to enable everyone to launch successfully a crowd funding project with token support – anywhere in the world.

There are three important features of the platform.

It is:
– Global (works everywhere around the world);
– Transparent (“Understandable”) – on the basis of a blockchain and with payment by crypto currency or with computer resources;
– “Profitable” – monetization through tokenomics and mining. Boomstarter.Network operates as a huge “mining-farm”, the miners get 5% of all funds obtained for the project.
Both two sides of the business process are in an equally advantageous position.
The author of the project pays with BC tokens for accommodation, promotion and other premium options. There are packages and an option for self-assignment of rewards to best miners.
Sponsors-miners use BC tokens to pay premium Miner PRO status, get access to more favorable terms of compensation, and access to the opportunity to get 5% of the entire project funding pool.

Economics
Regulation is being tightened in cryptosphere – it’s not a secret. Tokensales will not cease to be popular, but their number will drop – this is also obvious. Therefore, according to the authors of the project, some assets will flow from the Tokensales to crowdfunding. According to DiGrate rating agency, in 2014, more than 1,700 Tokensals were conducted in the world. 192 were found to be unpromising. Of the more than 1,700 projects, about 600 have not obtain the necessary amount for Tokensale and were forced to be closed. More than 750 projects were successful, this is about 45% of all projects. It is clear that the market is growing rapidly. If in 2016 the market volume reached only about $ 300 million, in 2017 this figure has already grown to $ 7 billion, and in the first three months of 2018 it amounted to about $ 4 billion. The largest is the Tokensale project Filecoin (the development of a decentralized network for data storage) in which in August 2017 it raised $ 257 million. Previous record holder – the Swiss blockchain start-up Tezos, the network protocol, the “killer” of Ethereum – gained about $ 230 million in 2017. The potential for investments in Tokensales is estimated at $ 10 billion by the end of 2018 .
Dynamics of global crowdfunding was estimated by TABB Group: i) in 2015 investments amounted to about $ 18 billion, about 40% of funds – charity / public funds; ii) in 2017, investments were about $ 57 billion, at least 20% were in IT projects; (iii) In 2018, the market could exceed $ 70 billion. And reach $ 100 billion by 2020.
What do we choose? The answer is obvious.
Additionally – a comparison table is given: 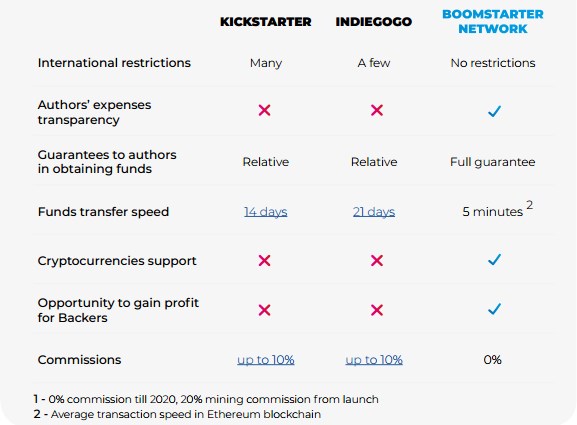 Tokenomics
Private sale is finished. There is a pre-sale now, its goals: 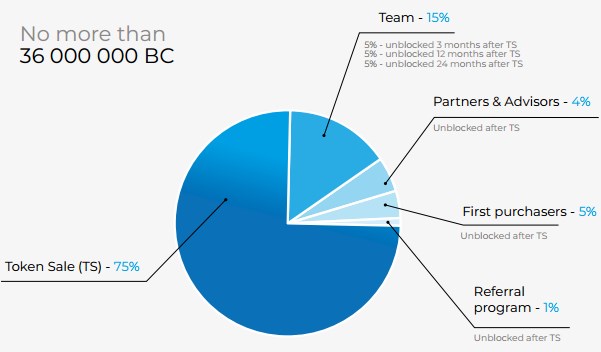 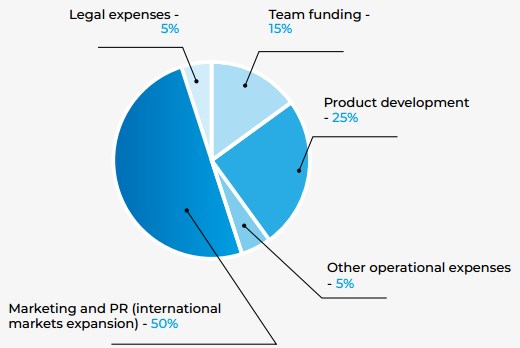 Roadmap
The project is developing since August 2012, when the platform of technological crowdfunding Boomstarter in Russia was launched. In September 2015, the 1000th project was successfully completed. In April 2016, the number of users of the platform exceeded 500,000. In November 2017, research and search of solution for smart crowdfunding began. The concept found in early 2018. Further roadmap – in the picture: 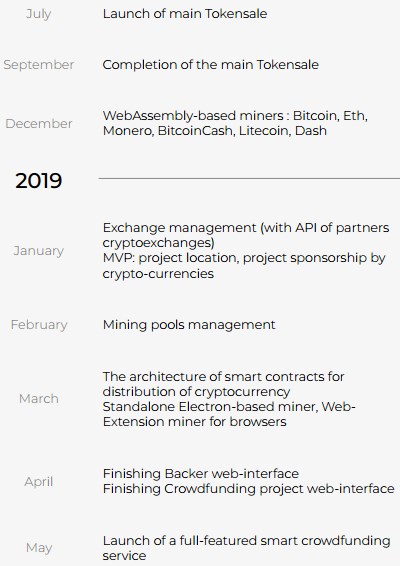 Team
Paddy Tan – Advisor, founder of InterVentures Asia (Singapore). Specialist in technology start-ups and enterprises. Experience supporting start-ups from the idea to mentoring, funding and launch. Worked for INTV Pte Ltd (InterVentures) as CEO & Founder, Fixer. And for BST Consulting Pte Ltd (Asia) as CEO & Executive Director.
Shelby Ti – Advisor, at InterVentures Asia Shelby leads a team of business analysts who provide management consulting services to both start-ups and public companies. Has deep experience in the development of business strategy, marketing and branding. Shelby also has extensive experience in the field of ICO.
Vlas Lezin – Advisor, ex-Vice President of Goldman Sachs. For more than 7 years he has been engaged in the introduction of advanced technologies in the world’s leading financial companies. He took part in the launch of several fintech projects, including Marcus & GS Select. Managed transactions with securities secured by assets. 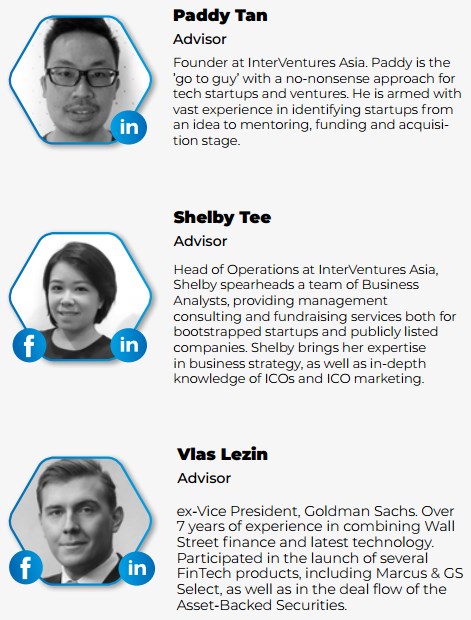 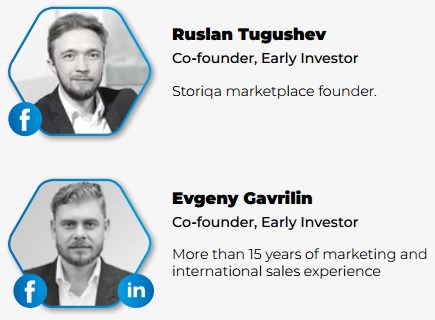 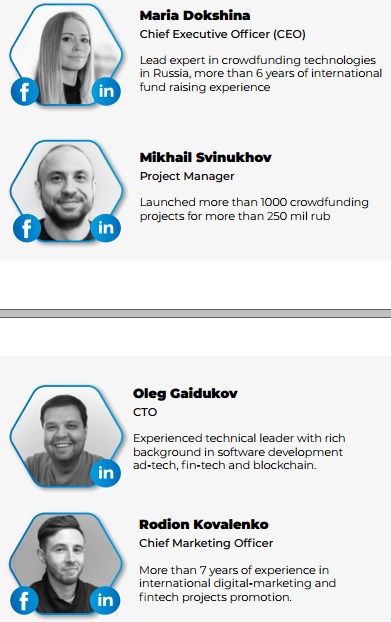 Conclusions
The project is striking in its simplicity and consistency. This is the simplicity of genius, about which we can say – Why could not I have guess? The authors obviously watched closely the startup market and offered their solution on time. It, on the one hand, is backed up by the experience of crowdfunding. On the other hand, the competence accumulated by the market in the sphere of blockchain use. As a result, a balanced solution was born and a team of tops and developers was competently formed. And the respectful attitude to the expertise of blockchain is noticeable even in the Whitepaper format, where the Advisors are represented prior to the founders.
Traditional crowd-funding platforms are unreliable. Blockchain and smart-contracts completely solve this problem. Transparency of the project and the authors’ confidence is confirmed at least by the fact that the smart contract code is laid out on GitHub.
Market forecast provided – looks very plausible and only means the growth of crowdfunding. So the growth and development of the project too. 4 success stories, from the production of a city backpack (small business) to the network of clinics in Latin America (social business) and the space satellite (space is Space), confirm substantial accumulated expertise in crowdfunding.
The team is large enough, well balanced and includes all the necessary competencies and distribution of responsibilities between specialists -as for Whitepaper.
Justified distribution of funds: development – 25%, marketing (for entering the global market) 50%. Experts are not forgotten – a good specialist never be cheap.
Cap is justified, the policy of tokensale is motivating to an earlier purchase (from $ 0.6 to $ 2 for a token, depending on the period of purchase).
The project has already 6 partners, with their level this promises that it will be developed steadily.
Summarizing: Boomstarter is a promising project, logical, thought-out, calculated both technically and economically. Most likely the token price will increase along with the project development .