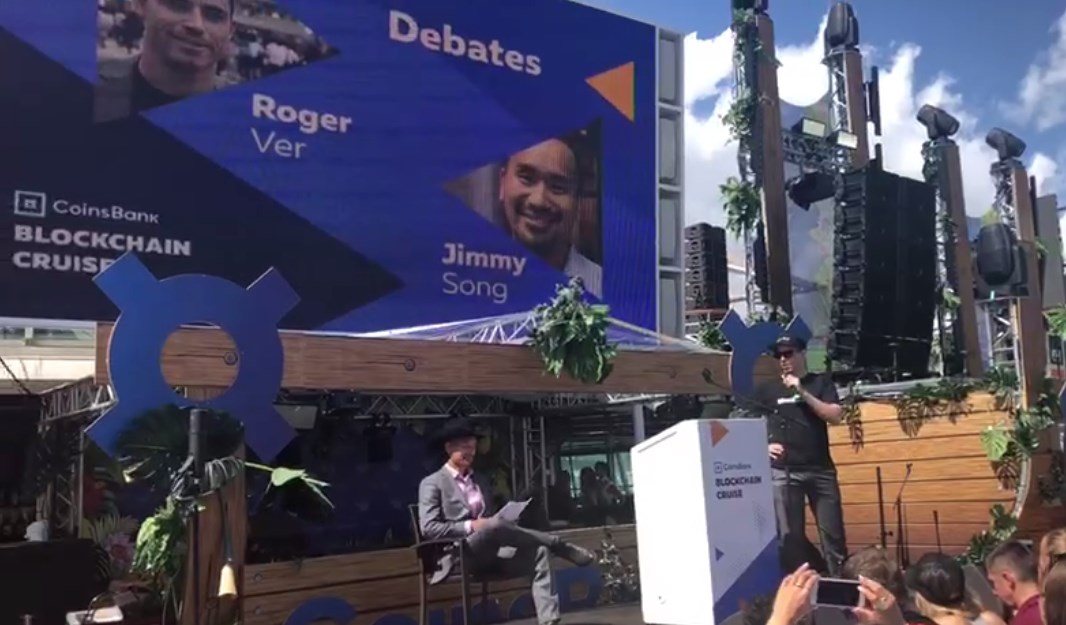 Coinstelegram Special Report Directly from CoinsBank Blockchain Cruise Mediterranean 2018 – now about the debates between Roger Ver, Bitcoin evangelist and Angel Investor – and Jimmy Song, Venture partner at Blockchain Capital LLC. The key is that Roger Ver suggest a bet on $1 million to his opponent about Bitcoin Cash growth. Below there are details from the most interesting part of the discussion.

– …Нe said that I’m not willing to make a bet to back up my predictions about Bitcoin cash overtaking Bitcoin. Well, I have an offer for Jimmy on that: I’ll bet a million dollars equivalent to whatever cryptocurrency you want – that within 10 years Bitcoin cash will have a larger market cap than the BTC version of Bitcoin today!

– A couple of notes I’d like to point out that Jimmy started his rebuttal by saying that I didn’t address any of the points that you made. I concluded my lasting point with offering a $1M bet on challenge to Jimmy at the market cap of Bitcoin Cash will be a hiring the market cap BTC in ten years from now. He didn’t address that. If the million dollars isn’t too much for me today, he announced, he wants to bet so.

Is Bitcoin cash decentralized? And why are a bunch of people fighting with each other? The very fact is that there’s a bunch fighting going on.

And the third fact is that the BTC community has expelled anybody from their community that disagrees with a roadmap. And literally kick them out of the community by silencing their voice and deleting and banning them from Reddit and Bitcointalk. That order the fact that they’ve been able to do that, to have the power to do that if anything that shows that the BTC coin is the one that simply controlled with the Iron Fist of the totalitarianism.

Whereas Bitcoin cash if you go RPTC or the bitcoin format bitcoin.com, this is all sorts of people arguing about all sorts of thing and lots of disagreements. Every single planet’s government control of people using fiat currency and I don’t care with Bitcoin Cash, cash whatever’s bitcoin you take your pick. Whatever cryptocurrency works to ask cash for people all over the world is the one that I get a support. Because I’m sick of people being forced to pay for wars on the world, take their blocking people in jail for smoking and plenty feel happy what happened to white power they feel happy. I sick about, I ripped up its power away from them. I don’t care which cryptocurrency it is with the reason. I’m busy promoting bitcoin cash as the best chance of doing that because of the biggest user base. Bitcoin cash is cryptocurrency that have the ability to bring more freedom to entire world than any other cryptocurrency in the world. And that’s why this is promoting Bitcoin cash today.

First thing we talked about was about fighting – I think Republicans and Democrats like quite a bit in the centralized system that’s called the US Government. So I don’t think that argument holds whatever. Any other political pace also does the same thing. You define fiat as legal tender laws that’s not what it means. Means a centralized authoritarian money – that’s what bitcoin cash is. It’s an authoritarian centralized money.