Cyclical development of the market economy is beside the doubt. The nature of capitalism is such that periods of development alternate with periods of recession. Usually they are separated from each other for decades. The last global crisis happened in 2008 and ended in 2010. It seems – now time to relax. But today, analysts say in chorus that we are at risk of another crisis! And they give five reasons that prove the gloomy forecast.

The first reason, which is called to justify a shortened respite between crises, is that humanity has had the mind and patience this time to do without war! The two world wars were a cynical and bloody, but lasting way out of crises. Now it is scary to unleash a world war, because there will be no winner. But, on the other hand, the effect of anti-crisis measures turns out to be short-lived. Economies do not have time to accelerate as they follow after the crisis – and all the prerequisites for a new crisis are already at hand. The most tough analysts are inclined to conclude that this time it is certainly impossible to do without war, because in the previous crisis of 2008 all peaceful anti-crisis methods had been exhausted, including quantitative easing and job creation.

There are less cruel, but also irrefutable circumstances. It has been noticed and proved that the most large-scale crises occur on the frontiers of changing technological structures. Scholars have already counted there are 5 or 6 such structures. The first one, based on a water and steam engine, began to form by the middle of the 19th century. Then it gradually moved to the second – including railways, shipping and ferrous metallurgy. The third technological structure (electrical engineering, mechanical engineering, chemistry) was formed in the mid-40s of the 20th century, then there was the fourth — automotive, organic chemistry, non-ferrous metallurgy. Fifth, our current one is electronics, computers, telecommunications — it lasts from 1985 to 2020. IT and robots are ahead. But before that, we still have to come through one more crisis.

Smart heads tried to unravel the causes of crises. Of course, to avoid them. But it was only possible to determine the so-called crisis cycles. There are several:

All of them very precisely coincide with ups and downs. And really they help to prepare for the depression. The trouble is that in 2019 there is a crisis in all these cycles at once ! And the big trouble is that here you can also add Samuel Benner’s completely empirical cycle (Samuel T. Benner). This guy was a metallurgical manufacturer until the post-war panic of 1873, financially ruining him. He started then to grow wheat and to think – what was it? And in the end he drew a beautiful picture – exactly predicted all the crises of the 20th and even 21th centuries!

Pragmatists, meanwhile, link the creation of a crisis situation not with some models, but with quite material factors – the accumulation of debts. And according to FRS, debt accumulation occurs at a cosmic pace. Indebtedness of students exceeded all imaginable sizes. But in 2008, this indicator second after mortgage loans, which crashed the market! 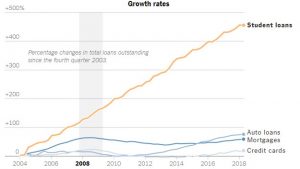 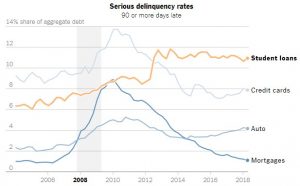 In the cult movie Knight & Day with Tom Cruise and Cameron Diaz, the hero instructs the heroine who came under the sights of the special services: “If they will calm you down and say that everything is good, it means they will kill you!” Special agents really conceived this villainy and used the NLP technique to lull the victim. NLP today is used even by high-ranking politicians. Therefore, when Donald Trump loudly declares that the American economy has never been in a better state than it is now – is it not a reason to go all in to save your money?

It is known that crises are the best time for the restructuring of enterprises and entire economies. Perhaps the coming crisis also gives such an opportunity. And above all – to those who managed to foresee it!