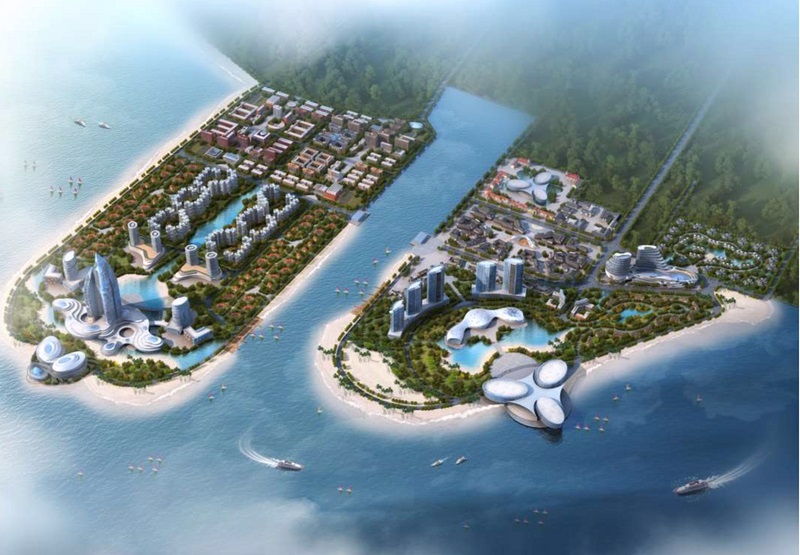 In Malaysia, the blockchain-city of Melaka Straits City will be built. It is stated that this will be the further development of the smart city concept, which has already been partially implemented in several cities in China and India, as well as in Amsterdam, Stockholm, Singapore, Dubai and others. But in fact, a blockchain-Disneyland will be built. The main currency of the blockchain city will be DMIcoin.

The initiators of the project are Chinese China Wu Yi Co., Ltd and the Malaysian SWT International Sdn Bhd.

China Wu Yi Co., Ltd. – construction and engineering company operating outside of China mainly, one of the 250 largest international contractors according to Engineering News Record.

SWTech works in the field of energy production from waste (waste to energy, WtE) and other alternative ways of generating electricity – wind, biomass, solar panels.

It is important that the project is supported by the Chinese government, that is strengthening its influence in the region. The Chinese Poly and CCCC have already shown their interest and announced participation. China Communications Construction Company develope transport infrastructure. China Poly Group Corporation is engaged in the management of capital and resources. It looks like Poly will develop the cryptocurrency component of the project.

At present, representatives of Melaka Straits City are slightly confused in their statements. On the one hand, a large educational center will be built, from the kindergarten to the university. On the other hand, it is a major tourist and recreational center that will bring substantial income to the economy of Malaysia. And on the third hand, it will be a large shopping center, with a duty-free zone. This was already stated by the official representative of Melaka Straits City, Lim Keng Kai. But how does all this fit on an area of 250 hectares?

Most likely, greed will win, and Melaka Straits City will be implemented in the Disneyland tourist format. In fact, for comparison, the American Disneyland covers an area of 200 hectares; over 16 million people visit its 55 attractions annually. Eurodisneyland (Disneyland Paris) is visited by over 12 million people, it also has 55 attractions, and the area is 1943 hectares. The Ministry of Tourism of Malaysia is still modestly planning 3 million tourists in Melaka Straits City.

An important component of the Melaka Straits City is the DMIcoin cryptocurrency, which will be accepted throughout the city. Lim Keng Kai declares:

– The basis of the blockchain technology in the Melaka Straits City will be DMI platform with DMI coin. It will mainly be used in payment of government-based services in the city. DMI will also feature an exchange that can allow tourists who visit Melaka Straits City to exchange their fiat currencies for DMI coins that they can use freely. When tourists visit Melaka, they will be required to exchange their money into digital currencies that they can use to pay for services using their mobile phones or computers. The DMI web application will be available on PC and the mobile applications will run on Android and iOS devices to provide flexibility regardless of the preference of the individuals.

The official representative of the blockchain-city also stressed:

– The businesses and merchants in Melaka Straits City will have accounts and a unique QR code where tourists simply scan using their codes and make payments. This is easy mobile banking that can be done in seconds. The transactions will all be stored in the DMI blockchain where any issues that arise can be resolved. The main purpose of the Melaka Straits City project is to build a tourist city based on blockchain technology. In particular, it implies the creation of a new tourist blockchain city brand which will enhance tourism development in the country and improve education.

It’s funny that the DMIcoin blockchain is already running, account creation is available, and with KYC – you will not register an account without a photo ID.

Applications are also available for both iOS and Android. But at the same time tokensale is scheduled for August 2019. And no you STO or IEO – good old ICO!

At the same time listing on stock exchanges according to WP seems to be held as early as December 2018.

In general, it is ICO in reverse order.

There are questions about the blockchain and DMIcoin. And it is completely unclear whether private investors will be admitted to the tokensale or only institutionalists. But the blockchain-city project will undoubtedly be implemented quickly. Or do we not know the Chinese? And that means, DMIcoin will give Xs.