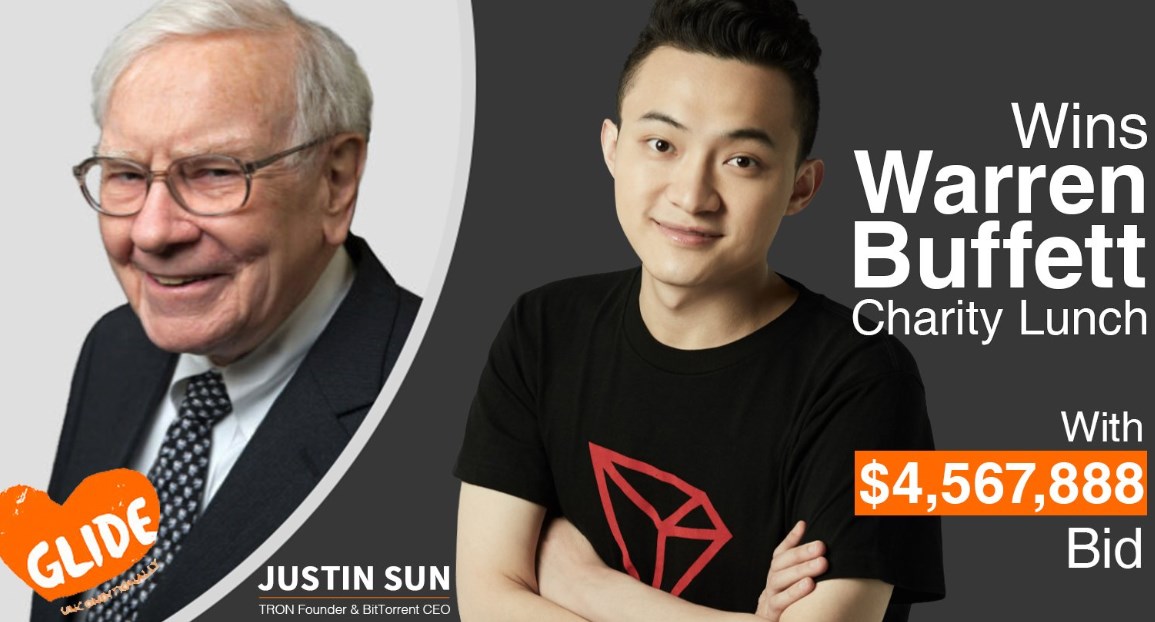 Soon after the another attack of Warren Buffett (Warren Buffett, 88) against crypto, another enthusiast of crypto will try to turn the Oracle from Omaha in our midst. Justin Sun, the founder and CEO of TRON, won the auction for the lunch with Buffett.

Warren Buffett is the third of the richest men on the planet on the Forbes list, after Jeff Bezos, Amazon and Bill Gates, Microsoft.

Buffett became a crypto community meme as a strong opponent of crypto. For example, in January on CNBC, he warned investors:

– In terms of cryptocurrencies, generally, I can say with almost certainty that they will come to a bad ending.

Later, he spoke more tightly at the shareholders’ meeting of his company Berkshire Hathaway, which owns more than 60 companies, many of which are known all over the world. Buffett told shareholders on May 5th that “Bitcoin is probably rat poison squared!”

Justin Sun paid over $ 4.5 M for the right to convince the super-investor. He plans to tell the Oracle from Omaha about the blockchain and cryptocurrency, while noting that investors, in his opinion, often change their minds:

– It is very common in investment circles that people will change their minds!

A charity lunch with Warren Buffett takes place rather modestly at the Smith & Wollensky steakhouse in New York. All funds are transferred to the charity organization Glide Foundation from San Francisco, which cares about the homeless.

Warren Buffett got the nickname “The Oracle from Omaha” because he became the most successful investor in history. All his prophecies were picked up by the investment community, most of them were justified. He lives and works in Omaha, Nebraska. With the company Berkshire Hathaway, Buffett is associated since the mid-60s of the 20th century. Buffett’s fortune is estimated at $ 82.3 billion (Forbes). He promised to give 99% of his wealth to charity and has already given away $ 3.4 billion to Bill & Melinda Gates Foundation.

Justin Sun entered the rating of 30 under 30 Asia, Forbes, in the category of consumer technology back in 2017. Last year he had purchased BitTorrent (BTT), became its CEO and successfully conducted BTT IEO. In 2019, the TRON token TRX increase more than 2x, from $ 0.0188892 at the beginning of the year to $ 0.035336 today. Mostly due to Justin’s tireless PR activity.

Justin Sun, paying $ 4.5 M for a lunch at a steakhouse, may not have lost this money. There are cases when Buffett offered investors a good job in his business after lunch. And the TRON founder has paid a record high price!