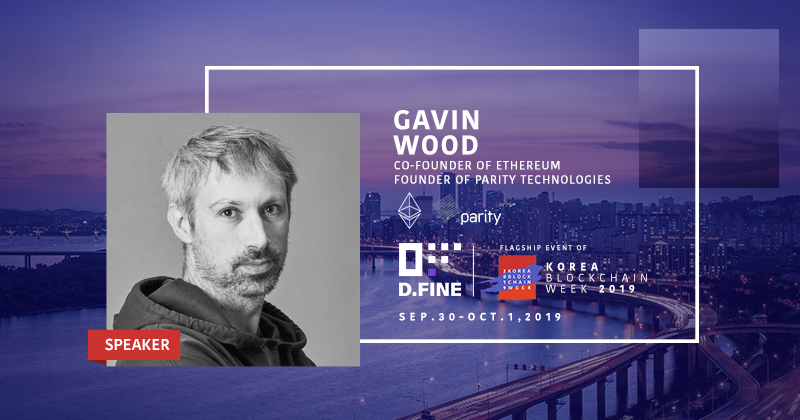 From co-founding Ethereum with Vitalik Buterin, to leading the global blockchain community, Gavin Wood has played an immense role in the field of blockchain. On September 27th, Wood is set to make his first stage appearance at the ‘Korea Blockchain Week (KBW 2019)’. His arrival at the event will also mark his first official visit to Korea.

Gavin Wood will be kicking off his keynote speech at the main event of KBW 2019 known as ‘D.FINE’. Gavin Wood founded Ethereum with Vitalik Buterin back in 2013, and as the CTO of Ethereum contributed massively to Ethereum’s growth as a leading player in Altcoin, by helping develop Solidity and authoring the Polkadot paper. After stepping off from the Ethereum Foundation in 2015, he has been making his own moves by establishing the Web3 Foundation as well as blockchain technology firm Parity Technologies.

Leading figures of the blockchain industry such as Nick Szabo, the ‘father of cryptocurrency’, known for devising the concept of smart contracts, and Adam Back, the inventor of the proof-of-work algorithm, along with Silvio Micali, the founder of Algorand, an encryption block based on the PoS algorithm will join Gavin Wood at KBW 2019.

In addition, Wikipedia co-founder Larry Sanger, Kabam & Forte co-founder Kevin Chou, Fundstrat’s Thomas J. Lee, Hashed CEO Simon Kim, and Terra CEO Daniel Shin along with 30 more big figures of the global blockchain industry will join forces to hold heated discussions on the present situation of domestic and foreign blockchain technology and touch upon a variety of subjects, including the direction on development and regulatory innovations.

A crucial factor of D.FINE, held from September 30th to October 1st at the Grand Intercontinental Seoul Parnas, is that it will be the first Korean conference to be hosted by leading Korean media conglomerates such as Korea JoongAng Daily, Hankyoreh, The Seoul Economic Daily, The Financial News, and Block Media, alongside co-hosts FactBlock, Hashed, and Cointelegraph Korea. Moreover, D.FINE is sponsored by major cities, Seoul and Busan.

FactBlock, the organizer of KBW2019, wants to introduce a convention that strays from the old, where “instead of a symposium-oriented event, a variety of new events will take place during the conference; such as in-depth panel discussions, meetups and parties to provide networking among participants, as well as blockchain related booths and games”.

5% discount for tickets for our readers with promo-code – d2a6eb70ed – https://dfine.koreablockchainweek.com/tickets