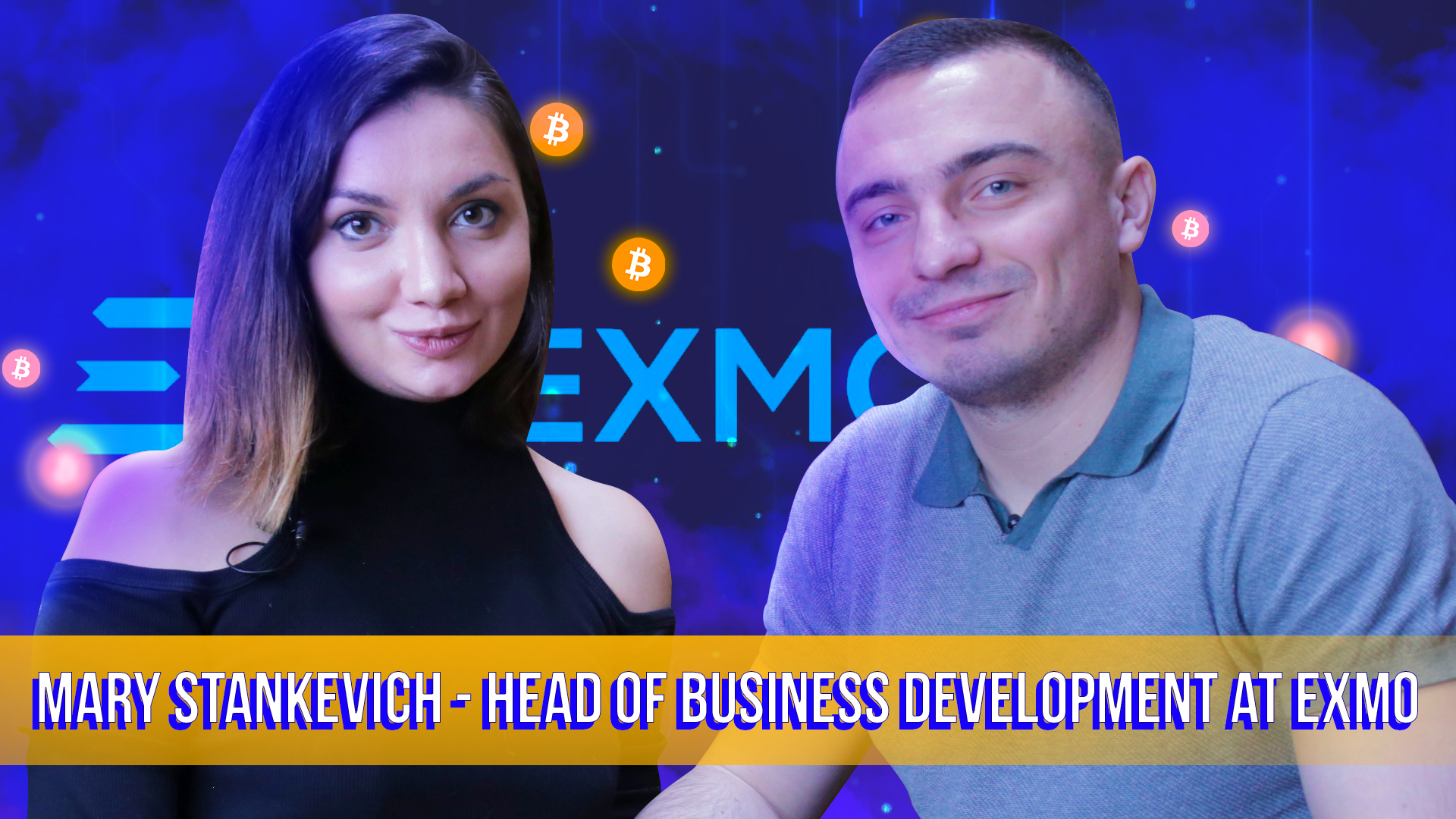 Hello, guys, I’m so pleased to be here with Mary Stankevich who is a chief business development director of EXMO exchange, and today we are going to speak about current market conditions, about the latest news in the crypto field, and of course about EXMO exchange, which is quite a significant player on Crypto market.

So the latest news is all connected to this coronavirus, so what is the impact of coronavirus on your exchange or is there any impact?

Yeah, I will not lie to you it is of course you know but it’s not only because of the corona. Have you seen what’s happening in the world? Yeah, it’s like crazy. So I’m not gonna lie of course, but we are in exchange, so for us, it’s actually good when the Bitcoin price goes up or goes down so people start to trade. And the trading volumes are quite okay, but a lot of events are canceled currently we’re all working from home. For us it’s ok, I mean we can use it because we are like the decentralized team are all over the world, we have four offices in the world. But still, the price is going down and that’s it’s still it’s a bad mood for the market. So yeah, of course, it affects us.

Yeah, so what do you think about Bitcoin? Actually is it critical points that Bitcoin went down to 5200, now it’s a bit higher it’s about 6200, and is this so dangerous for our industry right now?

First of all, I must say I’m really surprised. People don’t think that the crypto market is connected to stock exchanges. Of course, it is connected, of course, it’s connected to the economy because people who trade Bitcoin (you and me for example) they live in these countries were currently in the economic crisis. So that’s I mean kind of weird when people like “yeah you know Bitcoin is such a decentralized system why it is going down with the stock exchange?” — because you know people are the same that’s for sure. Of course, it’s bad I mean it’s bad because people lost their hopes. But for us, we have always been talking that bitcoin is an investment not for a day, it’s a long-term investment. So we believe in it, and I guess probably you’ve seen a lot of ads that show like “every year Bitcoin price is still bigger it’s still higher than it was before”. So I still believe!

The big event coming soon in the Bitcoin network, so we are going to see Bitcoin Halving which is going to happen in May or it may be in late April. What do you think about that? What kind of impact we will see on Bitcoin price?

Our guys, our technical team says that the price will go up, but I’m a business development, so I actually consider all the factors that we have. And currently, we have a lot of factors that could support Bitcoin going down, for example, even this economic crisis. So I don’t believe it’s gonna be like rocketing. I guess it will be like some positive factors some positive impact but I don’t believe that the price will go up “to the moon”.

What do you think about the connection between this crisis and the Bitcoin price? Because we already asked with it but let’s go a bit deeper. Maybe the stock market will go down even more aggressively and will take Bitcoin down with it, or Bitcoin will be a kind of a safe haven in the future?

I guess the second one. Because a lot of investors see Bitcoin as gold, for example, so you could go there and be saved there. It’s a super volatile currency, but look at the stock exchange market —  it’s crazy! During my generation, we never experienced that before. I speak a lot to the investors, I speak a lot to the traditional investors, who are hesitating what to do right now, and they all see Bitcoin as a kind of safe way. So I still believe if this stock market will go down it will affect the price of Bitcoin. But it will not be like a total crisis.

We will. And I must say that we actually already saw that for a Venezuela market and a Turkish market. So people were madly buying Bitcoin. I guess we with some other guys we did this chart the volatility of Turkish lira and Bitcoin and it turned out that Bitcoin was less volatile than Turkish lira. But I must say they actually went there and they’ve stayed there, they didn’t become like big adopters of Bitcoin, so they actually bought, but they don’t trade. So they held it currently right now, as I can see for the Turkish users. So maybe it will definitely bring like mass adoption, but I don’t think that everyone is gonna trade Bitcoin and will become like big traders (my mom for example, yes she will never, but she understands what’s happening right now).

But nevertheless, I also see a threat so as soon as markets are going down and some of the countries are going to be felt and to lose their power, and they are becoming more strict and they are starting to prohibit everything. Like we see now even Germany is prohibited to walk around, it’s a kind of difficult time. I’m a bit afraid that this coronavirus pandemic brings more countries to be unpleasant to Bitcoin. What do you think about it?

Guys, no. You sit at home, what are you supposed to do? I mean you go online, you do some online stuff. So, I know that a lot of offline companies currently are closing, I know that a lot of hotels, for example, the small hotels they’re closing, airlines they’re going bankrupt. But in crypto… I don’t think that even currently governments are really concerned with crypto. They have a virus to struggle with so, I don’t think so.

Bitcoin is 60% of the crypto market right now, it’s really dominating currency, What do you think about other currencies as we say Altcoins, do they have an opportunity to reach Bitcoin level of adoption?

No, I don’t think so, but that’s very important because we are in exchange we have a lot of applications you probably know this calling “shitcoins” mostly, they go to list us. In this market, it’s very hard to find a coin or token that is really good. So that’s why we called “shitcoins” because most of them really have nothing. But there are some very good altcoins, personally me, I’m a very big fan of Ripple, I mean I still believe that it’s going to up! I believe that there are some very good coins, and the Bitcoin it’s first and it actually translates the idea of the free decentralized market. So that’s why it costs actually the cost of it, it’s less actually, but BTC it is the first coin. Yes, I believe in altcoins.

I guess it could be the next trend for a crypto market because it’s huge and it’s regulated so it’s a little closer to what we want to have from the crypto market, so yes. But I guess the trend is already ongoing, but we are waiting for the regulations and for the laws.

Generally speaking about this year, will it be good for crypto? Because many countries are going to implement the regulation, we have some good news from India. So it’s now possible to buy crypto there, it was restricted there previously, and we have some good news from South Korea, it was also regulated there. But what do you think about regulation in Europe, are we going to see it this year, and what decision will they have?

But basically would have a good impact on the crypto industry regulation or it will stop some shady people to trade bitcoin?

Yeah, I guess it will stop, but it will be like a very good positive impact because it will attract big players finally. So and the price will go up, just because of big volumes. Currently, I believe it’s like maybe three percent of the market is traded currently, so because no one from big players doesn’t do that.

So many people are trying to find their opportunity in the crypto industry, trying to build some kind of marketplace, or any kind of service or new coin and anything. (I’m personally thinking on creating one more crypto exchange) Do you think is it a good time for that?

I must say that last year was the year of exchanges. Because this IEO started, this whole process, so exchanges were appearing out of nowhere. But still, the market is still okay it’s still wired, it’s there are a lot of places for everyone, it’s still huge so. I guess yeah, but you need to do it right because you know a lot of exchanges with the big names and even for us it’s very hard to compete with “big names”. So you need to find your audience, you need to find the advantages that you could offer. So it’s kind of hard but it’s not much harder than for the irregular market. If you want to open a shop in Moscow or a cafe it will be insanely hard, because it’s so many offers, and the demand is quite high. So better to open crypto exchange.

What do you think generally what kind of business models will be successful in the crypto industry? What do we need in our community? Which service provider do we need to have and to use it?

I guess the most important thing is this bridge from fiat to crypto, that’s why you probably know is that last year a lot of exchanges went to fiat, because they understood that still fiat is quite big for a person, and they still have their salary in fiat. They should be like a very comfortable transition from fiat to crypto, that’s right. And that’s why we are going to be so compliant to the banks gonna accept us and will love us. But still currently we actually at this moment when we are super compliant, we’re super wide, we have all these tractions, there are services and systems, we have an officer, we have mandatory verification, so we are super compliant and the banks still don’t want us. So we lost a lot of users from this mandatory verification, but we go there and they say “no you crypto sorry we don’t do that…”  I think “WHY?”,  I mean “we are transparent” and they still tried to stay away from crypto…

So speaking about the Exmo exchange, we have seen that Bitcoin went down right now, and I noticed that so many people are looking forward to buying crypto in Moscow. Did you feel that on EXMO exchange, did you find a higher interest rate in buying crypto on Exmo right now?

Currently yes. So I must say that the demand for buying Bitcoin currently is much higher than it used to be. But first of all, I must say that it doesn’t mean that people impossibly buying that. It means that the traders trade these higher volumes because they see the profit. I can’t say that a lot of people are actually buying Bitcoin currently but when it dropped down when it cost for 3500 there was higher demand.