FlipNpik is kind of Social Media for local businesses operating in an Ecosystem based on the Blockchain technology. The value generated is distributed in an equitable and decentralized manner among all active collaborators. The primary mission is to contribute to the improvement of the local economy and to promote the circuits of local and responsible consumption.

The mission of the project Contribute to the improvement of the local economy and promote the circuits of local and responsible consumption. It is claimed to be the first Collaborative Social Media for local businesses operating in an Ecosystem based on the Blockchain technology, in which the value generated is distributed in an equitable and decentralized manner among all active collaborators. The FlipNpik collaborative Platform is to be connected to the Blockchain in order to offer local businesses efficient, affordable and secure digital solutions. 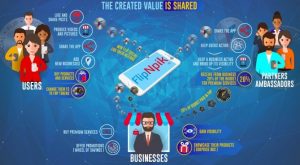 The FlipNpik Platform offers businesses enhanced visibility generated by the participation of their community. The participatory model gives users-collaborators the opportunity to get rewards or remunerations for their actions. Some of them – the most active – will became the Ambassadors Partners of the business or businesses and will get profit from this activity.

There are even 2 ways of getting rewards from FlipNpik platform – Flip Social and FlipNpik token. 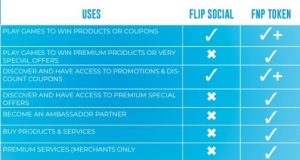 The FlipNpik (FNP) is a utility token, distributed and identified on the famous Stellar blockchain Platform. The Flip Social is a reward system dedicated to stimulate and retain the users of the Platform. In return for their positive actions, users-collaborators receive Flip Social that they can use to benefit from instantaneous promotions, to discover and obtain products or simply to be entertained with the available games on the Platform. Ambassadors Partners receive a remuneration from their business when they actively contribute to increase the visibility of the business within the Ecosystem. The FlipNpik (FNP) is a coin with broad functionality throughout FlipNpik Ecosystem. All products and services will be payable in FlipNpik Token within the Ecosystem. The user holding FNPs will have the opportunity to become an Ambassador Partner. As an active partner on the platform, this Ambassador, co-creator, will be able to receive from the business up to 20% of the budget to use the premium services offered within the FlipNpik Ecosystem. The product was designed to optimize the customer experience for local shops; so as to get maximum results for a minimum effort and investment, through simple and intuitive tools.

Ecosystem includes businesses, users and partners of the businesses – Ambassadors. It is a reward system with the Flip Social (the “FS”), and a token, the FlipNpik (the “FNP”), both having the vocation to be exchanged for various goods and services within the Ecosystem which allows merchants and users to become co-creators of value.

FlipNpik platform is developed by Fliptech SAS with head office in France and operational office in Geneva, Switzerland.

The team is globally distributed, there are CEOs in main areas: Europe, Asia. Possibly it will provide activity across North America later. 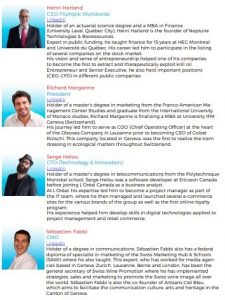 CEO Worldwide is Henri Harland. Holder of an actuarial science degree and a MBA in Finance (University Laval, Quebec City), Henri Harland is the founder of Neptune Technologies & Bioressources. Expert in public funding, he taught finance for 15 years at HEC Montreal and Université du Québec. His career led him to participate in the listing of several companies on the stock market.

Board of advisors is very impressive, there are advisors from all sides of the project development, including blockchain, marketing, PR, legal, retail. 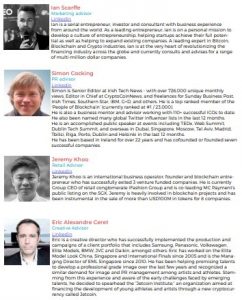 The FlipNpik application has been developed by Geekco Technologies Inc. in Quebec, in the Montreal area. FlipNpik is also implemented in Singapore, Geneva, London, Paris, Dublin.

The commercialization of the FNP will begin on May 1st, 2018. The sales process will consist of 3 phases: 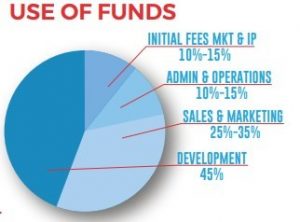 The 1 billion FlipNpik tokens issued during the ICO will represent the single money supply of the FlipNpik Ecosystem on the Territory (Europe and other countries of the world excluding North America) operated by Fliptech. However, the money supply could increase by 50% if Fliptech or an affiliated company operates another territory such as the United States and/or Canada.

All purchases of FNP tokens have to be made through the secure platform developed on the Blockchain to provide a simple and secure payment process, and covering all aspects of due diligence and KYC as established by the European ICO charter.

The idea ofthe project is simple as if it is genius: to connect for cooperation local businesses and their consumers through blockchain and social media. Thus, local businesses receive an effective channel to promote their business. And consumers are encouraged, as it is easy to guess – by earning FNP tokens for the created content in form of favorable, justified and backed by own experience reviews about products and services. Several years ago, one of the most powerful channels for promoting the Internet was the so-called “feedback sites”. Many businesses had been grown up quickly due to that content. The advantages of FlipNpik is that it connects the power of social networks with the universality and incorruptibility of the blockchain. Local businesses are particularly affected by the lack of effective advertising, because they are not able to bear such marketing costs as global companies.

The FlipNpik solution looks demanded, aimed at a huge market and successfully combines all the advantages of the blockchain and social media. In fact, FlipNpik is Uber for local businesses plus social media.

The project is supported not only by the idea, but also by the implemented MVP – mobile application.

The team looks balanced and effective. Developers mainly Canadian, marketing – mostly the European team (Switzerland). In general, the team is international, there is even a UX / UI specialist from Ukraine.

Special CEOs are in Europe and Asia, they are also experienced entrepreneurs.

The advisory board includes specialists on all the necessary components of the project – from marketing, PR to blockchain and retail.

Actually, MVP is created as a mobile application.

It is important that the project implemets the proven solutions. In addition to the social media, this is Stellar (XLM) blockchain – a very famous and well-proven solution. The Token XLM showed more than 10-fold growth over the past year.

Tokenomics is developed for maximum incentive to participate. One can buy tokens with fiat money too.

There is a bounty program, a good enough hype, including offline press support.

The project has some important partners, investors and retail networks.

It is very likely that the token will grow up, and in the long term, not only during ICO and listing on exchanges.