According to CoinMarketCap, AurumCoin (AU) recorded a huge profit on September 1. Today AU token showed the increase by 6 000%. The token jumped to 23rd rank by market capitalization and AU price was $1 786,33. 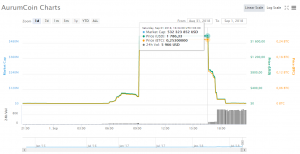 Despite this massive price surge, trading volume was still relatively low. This could mean that CoinMarketCap had some sort of technical issues that led it to show false statistics.

At the beginning of August, CoinMarketCap showed an unimaginable growth of cryptocurrencies’ prices.

Price of Bitcoin on Chinese exchanges like BitForex, Coinbene, FCoin, CoinEX etc was over $73 000. ETH price was over $5 000 on these exchanges, according to CMC. Aeternity, Bitcoin Diamond, Golem and MOAC increased by more than 900%.

At that time CoinMarketCap had some minor technical issues. But what has happened this time?

In addition to possible technical issues, there is also the possibility that someone has arranged a pump-and-dump scheme, or the trader just mixed up a large order. This could be some kind of marketing ploy.