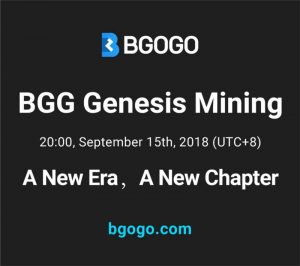 On September 14, the Bgogo team announced that Bgogo will officially list the BGG/BTC and BGG/ETH trading pairs at 20:00 on September 16th, 2018. These pairs will be available immediately after the closure of Genesis Mining. The Bgogo Platform will provide BGG deposit and withdrawal services one week after the official listing of the BGG trading pairs.