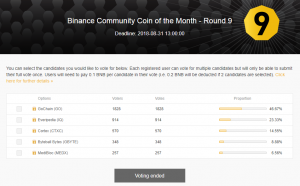 As we remember, round 8 was not smooth. According to the voting results, Mithril (MITH) became the winner of round 8 of “Community Coin of the Month”. However, after Binance weighed all factors in the voting process and had also applied a consistent methodology across all candidate votes to filter for oddities according to Binance’s community vote rules, the winner of round 8 became Polymath (POLY).

As a winner of round 9, GO has been awarded a free listing placement on Binance. The exchange will make a further announcement regarding the listing time at a later date.

Binance also launched Lucky Draw for round 9. According to the rules, Binance will place an additional 1,500 BNB into the Lucky Draw pool. With 3,917 total voters, this brings the total pool for the Lucky Draw to 1,891.7 BNB.