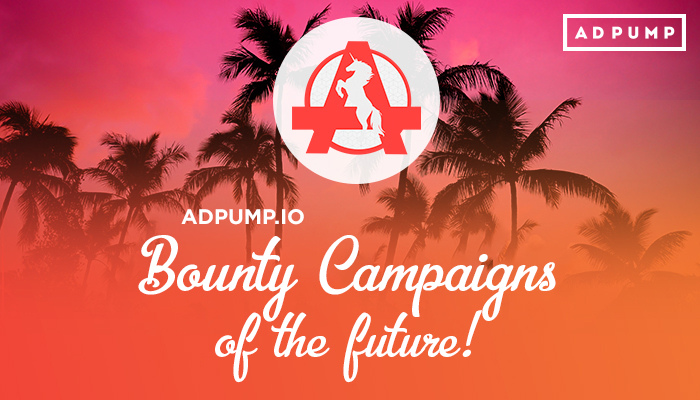 Everyone knows how important a bounty campaign is for any project launching ICO. At the same time – this element is currently no less chaotic than the ICO market itself, most of work is not automated, data is collected manually through Google tables with manual input of each participant and tokens reward subsequently distributed.

At the same time, the main phases of any bounty campaign are:

–          Assistance in the localization of materials in different languages and markets;

All these tasks can be automated by using blockchain applying cost per action model on  a certain platform.

We implemented part of our own bounty campaign based on CPA, in order to thoroughly understand all the problems of our advertisers and publishers.

Today we want to offer you a possibility to build your bounty campaign on Adpump platform.

We launched Adpump ICO program on our marketplace and integrated it with our ICO landing page.

How it works on the part of bounty program participants?

A participant should register on Adpump marketplace, connect to Adpump ICO bounty program and get his personal tracking link to place creative materials and articles with the tracking link on different sources, for example bitcointalk.org threads.

After each target action a pixel or postback is triggered and it sends a signal to the system that the action was committed by a tracking link from a particular participant. At this point he is rewarded for his traffic.

What are the best target actions to be paid for in any bounty campaign?

It could be a click-out to a project Telegram channel, email registration of a potential investor (it is extremely relevant for companies before Presale stage), white list subscription in order to follow ICO news. The main feature of a bounty campaign  based on our marketplace is that an ICO project pays in tokens only for a specific targeted action that leads to grow a pool of investors.

How to decide the amount of tokens as a reward for that targeted actions?

In our experience the average of 20 ADPs is paid per subscription to a telegram channel, 1 ADP is $ 0.15 USD. 20 ADP is usually paid for a potential investor email registration (and 20 ADPs for a subscription to an ICO news).

Thus, an ICO project will pay $3 USD for one subscriber to a telegram channel, $3 USD – for a potential investor and around $3 USD for a subscription to a project news.

These amounts are extremely low if you compare them to traffic prices on crypto investments, ICO and blockchain resource and such content websites, where only one click can cost you $3-10 USD!

You can use this method not only with reposts but also with content creation. For instance, a person who makes a translation for your bitcointalk thread into another language, places his referral link on different sources , and his interest lies in creating as much content as possible for your project, as he receives tokens for each action made by his tracking link.

Moreover, through the Adpump.com marketplace you can also make personal token bonuses to participants, in case  you want to reward or encourage participants in generating successful content of your program.

After we launched our own ICO on Adpump platform, we received more than 50 bounty hunters during the first days of our presale campaign and their number is growing exceedingly every day.

Why is our approach to bounty campaigns is more rewarding?

The world is changing rapidly, and the blockchain environment is changing as well. Launch bounty campaigns of the future and integrate them on Adpump.com platform straightaway!