The Atonomi project, like all blockchain-projects, is focused on solving security and identification issues. But the trick is that it’s not for people, but for things. As a result of its implementation, the very “things” that interact on the Internet of things – will do without the participation of a human. It sounds fantastic. Nevertheless, the project is quite real.

The market of Internet of things is growing now at 30% per year. According to Gartner, in 2017, about 8.4 billion IoT-devices were connected to Internet. This is 31% more than in 2016. Forecast by 2020 about 20.4 billion. Everything would be fine, but with the growth of the IoT network, the vulnerability of it is growing too. And the problem of changing factory settings has not been solved, which has become the main reason for network hacking many times already. And a convenient technical solution is not offered. IoT is the most important component of Industry 4.0. The development of IoT promises explosive growth of industries and economics. But losses from hacking IoT networks can also be estimated in billions. The volume of IoT devices already many times exceeds the number of gadgets on the hands of people. And the gap will only increase. Therefore, it remains to be surprised that the number of blockchain-projects for IoT with ICO does not break records yet. There is good reason to believe that this will happen soon. But that’s why Atonomi is in a very favorable market position. An additional factor of importance is in what areas IoT is already being applied and in what will first of all be developed in the near future. There are critical spheres, without any exaggeration: industry, health care, a smart home and a smart city.

Atonomi creates a complete ecosystem of safe operation of IoT with the ability to conduct transactions without human intervention. This sounds extremely suspicious. But the proposed technical solution looks like good enough.

First of all, the network is created on the basis of proven and not yet discredited smart contracts Ethereum. The ecosystem includes devices, manufacturers and auditors. Registries are maintained for each category, these are smart contracts, entries to which can be made either by Atonomi itself or by authorized partners. A reputational registry is also maintained, entries to which are performed by authorized auditors.

For all forms of network access, the Atonomi ATMI token based on ERC-20 is used. For devices, it provides registration in the network and the possibility of a transaction between devices. The ATMI token is also used to motivate participants to develop an ecosystem. 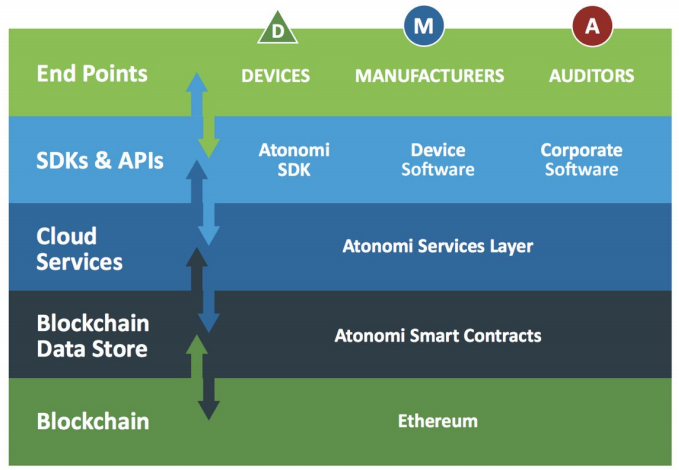 In order to simplify the interaction in the network for device manufacturers (OEM / ODM) and auditors, they are provided with a free SDK.

In general, the functional of the systems is determined by the interaction of the four components. 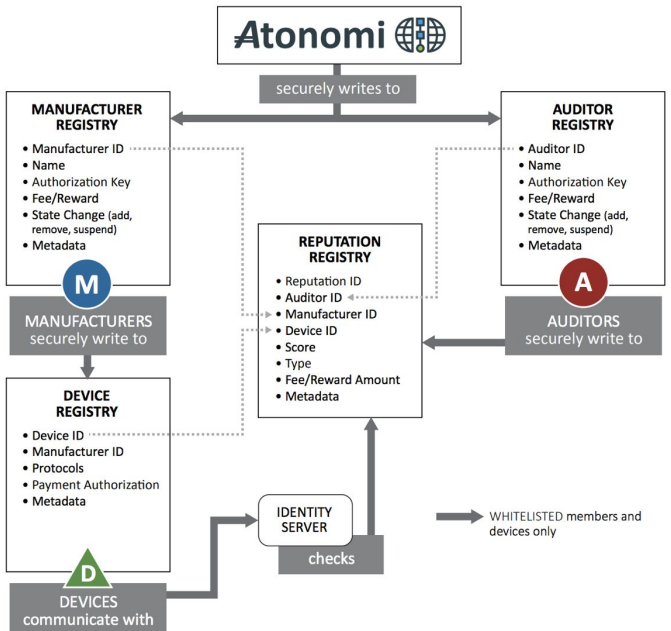 Whitelist: open and last for at least 2  weeks

Public sale: start before the end of May

Start using tokens for developers: from May 15, when the network will be launched on schedule

Order of public sale: on the first day there will be sold a limited quantity of tokens – so that everyone who is subscribed for Whitelist, could participate.

Will be sold: 500 million tokens

The price of the token: not determined, will be determined by the date of public sale.

The project was initiated by CENTRI Technology. It is a well-known provider of security solutions in the IoT industry. Its solutions are used by Microsoft, Flex, Intel, etc.

The team looks strong, as are the editives.

Vaughan Emery is the founder and CEO, a well-known expert in the software and an entrepreneur in the cybersecurity market for more than 20 years; founder and CEO of CENTRI Technology

David Fragale is co-founder and vice president of the product, expert on criptocurrency and blockchain at PricewaterhouseCoopers, researcher at the Massachusetts Institute of Technology, 17 years of experience.

The team of advisers is headed by Dr. John Clippinger, works at the Massachusetts Institute of Technology as a researcher, co-founder of Token Commons. Adviser in the projects of the Bancor Foundation, Cashaa and others.

A very important sphere of application. Important, demandable and complex. Nevertheless, the project is technologically well developed, in any case – it is technically grounded.

The team is strong.

There are questions about scalability – links to the scalability of Ether are not convincing. But it is mentioned that the blockchain may be made on the another base if necessary.

The project is very interesting.