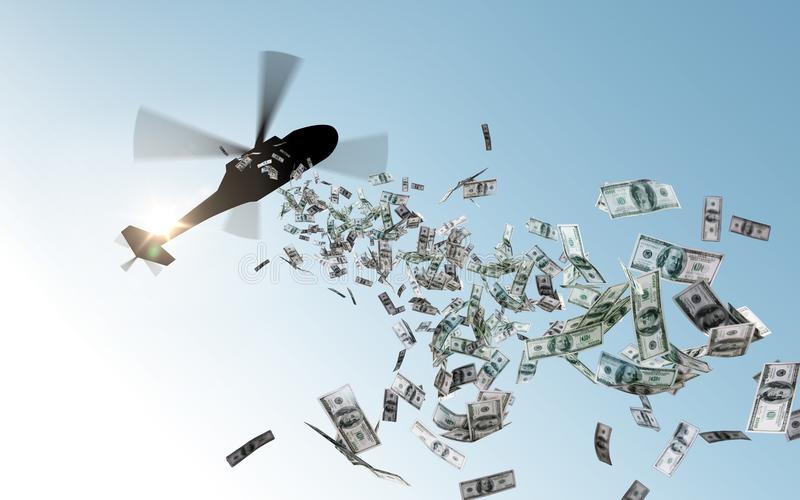 Airdrop – perhaps the most attractive way to get crypto currency. Okay! It’s a free distribution of coins and tokens without any obligations! But to be honest to the end – it’s not completely free, not simple distribution, and it’s not entirely without obligations. Nothing comes easy…

So with airdrop. Sometimes it is compared with samplers, which are distributed in shopping centers – they say, try – and you will want to buy. Quite an appropriate comparison. But one who is not alien to economic knowledge, can recall that there is such a way of putting the national economy out of the crisis – “Helicopter money”. That is money distribution to citizens of the country for nothing. In hope that they will start spending and thereby will launch an economic multiplier. In such way it is possible to push the country’s market economy out of the deadlock. This method was used in Japan in the 70s of the last century and proved its effectiveness.

It is also important that airdrop is not just helicopter money, that will come to anyone. To participate in the distribution, you will have to show your loyalty. This is essentially an advertising campaign for projects that do not look very convincing, are created by a little-known team or with a controversial concept. For their tokens, the team in fact buys the attention of the community. As a rule, the basic conditions are to make retweets, share a post in a social network, join to a telegram-channel, etc. The conditions are usually detailed. Plus, of course – you need to register for participation. In this case, you will have to provide basic personal information that may be used for further contacts.

In a famous anecdote, a poor Jew asked God for a long time to give him a prize in the lottery. There was a voice from the sky at last: “Abram, buy at least one lottery ticket to win!” So with the crypto. To start earning – you need at least a wallet. Airdrop motivate newcomers to ome through this procedure, which require some attention and patience. Plus to that – as a rule, tokens which are distributed by airdrop – are not quoted on stock exchanges and can not be immediately sold. You have to wait for a while. Typically, a very small percentage of tokens are distributed, and the goal for the authors of the project is that the owners of tokens use them in the project as token-utilities – thereby contributing to the project growth.

And now you are ours!

Tokens at the airdrop are distributed, of course, without formal obligations. But this is the same as in the proverb: “One link broken, the whole chain is broken” Obligations always arise when you become an investor, even on such free terms. One way or another, you are tied for a time to the project, have to support it, and you are commitment to it. And if the development goes well – you will win. Well, on the contrary – on the contrary …

Most airdrop are held during the ICO for its success. But it happens that tokens are distributed by some occasion. For example, for the World Football Championship in Russia, the Russian team Waves (WAVES) issued two special tokens. Waves (WAVES) is an open blockchain that is designed to create, transfer and exchange tokens with minimal volatility. By the way, it allows anyone to easily launch their own blockchain projects. Tokens issued on this platform can be distributed and sold for other crypto-currencies. Tokens to Mundial 2018 – football token (SOCCER) and MutCoin (MTN). You can get them in the usual way – to show some activity in social networks and to report data about yourself in the registration form. 200 000 SOCCER will be distributed in total, 150 000 – for newly registered ones and 50 000 will be received by owners of MEDIA PROTOCOL TOKEN (MPT) and WAVES COMMUNITY TOKEN (WCT) tokens. 100 000 MutCoin (MTN) tokens are issued . 50 000 MTN will be transferred to users, the remaining 50 000 MTN can be received by players and coaches of the national football team of Russia. It is important that both new tokens will be redeemed by Waves for BTC. And the cost of repurchasing MTN depends on the results of the Russian national team. The more successful Russia, the higher the price of redemption.

Case: Blockchain for fans of painting without ICO – Fresco (FRE)

The Fresco project generally distributes its tokens by airdrop way, without ICO. Fresco is a blockchain for the art market, and allows artists, investors, dealers, galleries and administrators to demonstrate their artworks and evaluate the richness of collections while creating an effective and intuitive system for assessing the value of art. Fresco distributes its tokens, according to the authors of the project, in a “social way”, with the rule: “Each applicant can receive up to 2000 FRES if passes a quiz of 100 questions to show his passion and understanding of the world of art and FRESCO.”

Where to find them?

With all the “No”, the airdrop is a good way to enter the crypto. But how to know about distributions? Of course, they usually start with Bitcointalk – this is the oldest and largest forum of the cryptocommunity. There ICO try to light up first. However, there are problems with registration in recent times – you need a lot of patience, and sometimes you need to pay. And besides, like any large and old resource, Bitcointalk is extremely inconvenient to use for a particular case. In particular, it is difficult to determine which of the presented projects is real and which is a scam. From this point of view, the aggregators of airdrops are very good. They make their own selection, sort, cull the scum, at least – they try. Today, there are several such aggregators, the most interesting ones:

As you see, each one is able to get free coins from a variety of projects. The question remains – how to choose the right project, so that the coins received grow in value and bring you profit? This is an eternal problem of investments, and it is not easy to solve it. But there is a clue – of course, Coinstelegram.

We publish regularly, almost daily, reviews of top projects, which, as a rule, subsequently reveal multiple growth. We give the most objective assessment of the idea, team, marketing, tokenomics of each project. Our reviews sometimes appear even before the project is released on the ICO – thanks to the team’s activity, credibility, direct contacts with the authors of the projects and expertise. Choosing projects with Coinstelegram, you are most likely to be in the black.