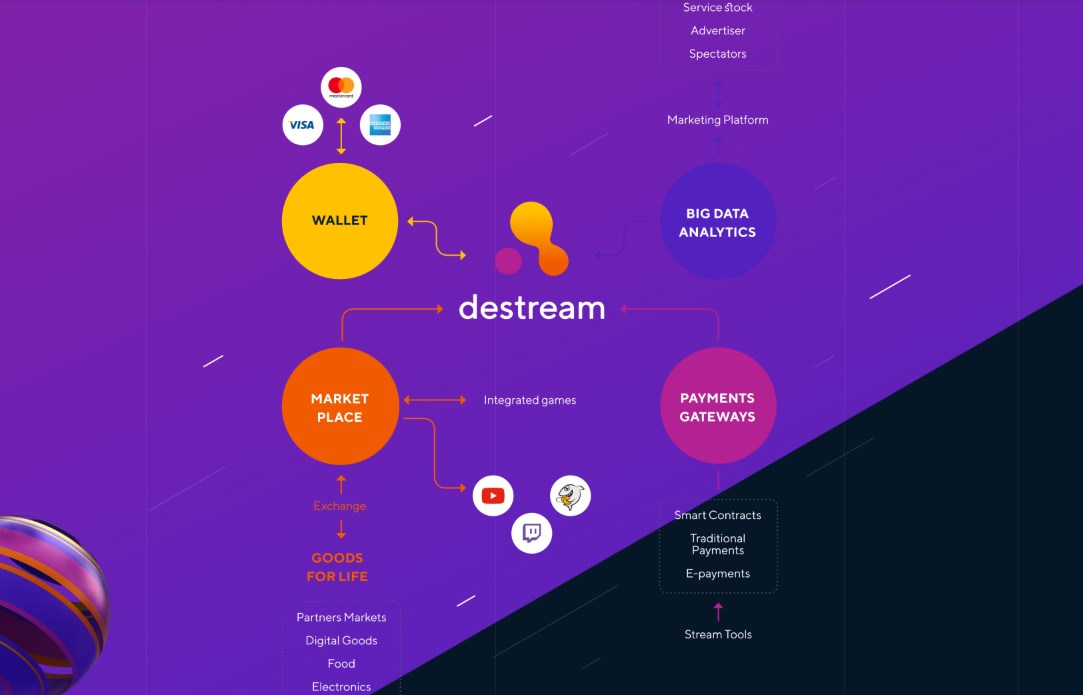 DeStream is not a streaming platform, but a global platform for the streaming market that will allow maximizing the productivity of streamers, diversifying their activities and securing start-up capital. Blockchain technology make it possible to reduce transaction fees by more than twofold to 0.77 percent per transaction. The project team ensures that they exclude payment systems from the process and reduce numerous transactions costs. The streamers will be allowed to focus on creation, instead of operational activities and – consequently – content quality will be improved greatly.

It is noted that audiences on popular streaming services such as Twitch, YouTube and Mixer are increasing by an average of 10 percent a quarter – due to eSports market growth. And donations to streamers grow in the same proportion. Why? Thanks to thankful fans!

Another one source of revenue growth for streamers is advertiser’s payments. DeStream ensures that it will enable business to launch campaigns with the sector’s rising stars and distribute their effect on the target audience using Big Data. So these campaigns will be far more successful.

DeStream’s ecosystem will be integrated first in popular streaming services Youtube, Twitch, Mixer and afreecaTV. That mean that streamers will continue to use the platforms that are familiar and convenient for them. But with the power of DeStream they will engage more viewers giving them new forms of content due to dozens of smart contract templates. Fans will be engaged thanks to superb features such as live voting by using DST-tokens, enabling them to be active participants in communication with their idols during a stream. With internal marketplace fans will purchase in-game goods too.

DTS will be used also by advertisers to reward streamers along with viewers. As for streamers – the team promises to launch a debit card to make it easy funds withdrawing, to pay in stores or get cash in ATMs. DeStream community will be strengthened by founding nonprofit Worldwide Streamers Association. Its goal is to develop the industry, and to allow professionals share skills and train beginners.

As for WVP the team claims it fully worked out the logic and structure of the platform. The design is at the stage they currently working on. Part of the elements have already been designed and is available by link on site. Latest commits and improvements are on Github. The team also produced detailed Roadmap. According to it alpha version with mobile app and blockchain-based voting system will be ready in first half of 2019.

The project CEO and co-founder is Anar Mekhtiev. He has more than 15 years’ experience in software development and produced a number of courses focused on blockchain. CFO and co-founder is Tachat Igityan, named as one of the 50 most influential people in web development by Tagline, first and largest Russian-language analytical agency, exploring the market of interactive marketing, digital-production, related services and technologies.