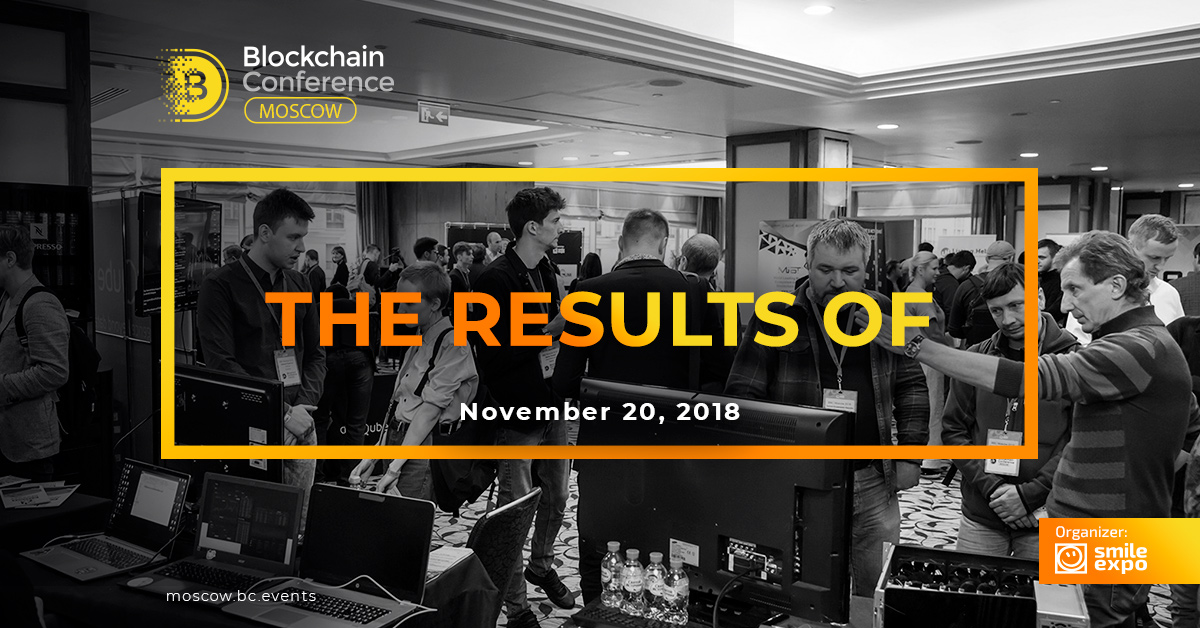 On November 20, the heart of the Russian Federation held the eighth Blockchain Conference. Its organizer is the Smile-Expo international company.

The large-scale specialized conference brought together 40 speakers from seven countries, including Russia, Ukraine, Switzerland, Germany, and China. 500 attendees came to hear their presentations and observe the products at the demo zone.

Within the conference, the experts shed light on the industry burning issues – cryptocurrency regulation, influence of digital assets on capital management, and the future of decentralized technologies. Bitcoin rate and its prospects appeared among the hottest topics for discussion at the main stage and on the sidelines of the conference.

“Bitcoin is the main marketer. If Bitcoin grows, so does the interest in it. The same situation can be observed in case Bitcoin drops,” thinks Evgeniy Romanenko, crypto economist and moderator of Blockchain Conference Moscow.

One of the speakers was Aleksey Studnev, developer and CTO at Izetex PTE Ltd: the expert shared his opinion on the future of blockchain within the nearest decade.

“Cryptocurrency rate is information noise that has no impact on blockchain operation,” reckons Aleksey Studnev. He also claimed that the technology would follow the steps of the Internet and would become an indispensable feature of every smartphone. As reported by the expert, this would be the main aspect to affect the volume of the crypto market that would dramatically grow popular.

DarQube Founder Rostislav Haliplii told about the functionality of modern crypto exchanges and the role of artificial intelligence in trade on the crypto market.

“The primary target of AI technologies introduction into a DarQube platform is assisting traders in building revenue-generating strategies. AI can be applied to turn a good strategy into the brilliant one,” explains the speaker.

The event consisted of a panel discussion titled ‘Regulation of blockchain and digital financial assets’. The most experienced Russian crypto experts and lawyers took part in it.

Among them, there were lawyer and expert on international financial and corporate law Maxim Pervunin, Director at OECD Centre RANEPA (the Russian Presidential Academy of National Economy and Public Administration) Antonina Levashenko, Partner at Nektorov, Saveliev & Partners (NSP) Alexander Nektorov, lawyers Alexey Sinitsyn and Maria Agranovskaya, and Advisor to the Federal Chamber of Lawyers of the Russian Federation Helen Avakyan.

“Development of documentation that meets the standards is important, it should also reflect emerging aspects and provide new terminology. Another vital step lies in its application,” thinks Maria Agranovskaya from Moscow-based GRAD Attorney Bar.

The experts discussed cryptocurrency influence on capital management and obstacles on the way of digital money development. The panel discussion was part of the Fintech section. Meanwhile, Blockchain section specialists took part in the panel discussion titled ‘Evolution of the blockchain technology – period of experiments’.

Particularly, Hotmine presented its equipment for heat generation by means of mining. As reported by the company representatives, heat produced by such devices will be a basis of the future mining.

At the booth of the manufacturer of 51ASIC mining equipment, attendees had a chance to take a look at ASICs, hardware wallets, control boards, power units, main bodies, and cables.

The leader of the Russian mining market WattsOn showcased its new product – ASIC BITMAIN ANTMINER S15. The company also announced the launch of a new pool.

Attendees had a possibility to ask the demozone participants any questions concerning their products, partnership conditions, and even their forecast of a Bitcoin rate.

“Our company was working during Bitcoin’s first and second fork. We witnessed the period than Bitcoin skyrocketed from $175 to $1000, and then from $2000 to $16 000. Everybody poses us the same question – when will it shoot for the moon again? Here is my point of view: as soon as the next halving comes about, Bitcoin will dramatically rise,” commented a Hotmine representative.

Blockchain Conference Moscow was organized by Smile-Expo, an international company with a 12-year experience in this sphere, which is 250+ events, 356 000+ attendees, 500+ speakers, and 500+ top exhibitors.

Smile-Expo is an organizer of major conferences dedicated to blockchain and cryptocurrencies. The company has been holding the Blockchain & Bitcoin Conference series across the globe since 2014. The events took place in 25 countries.

For more information about the event and news in the cryptocurrency universe, visit the official website of Blockchain Conference Moscow.