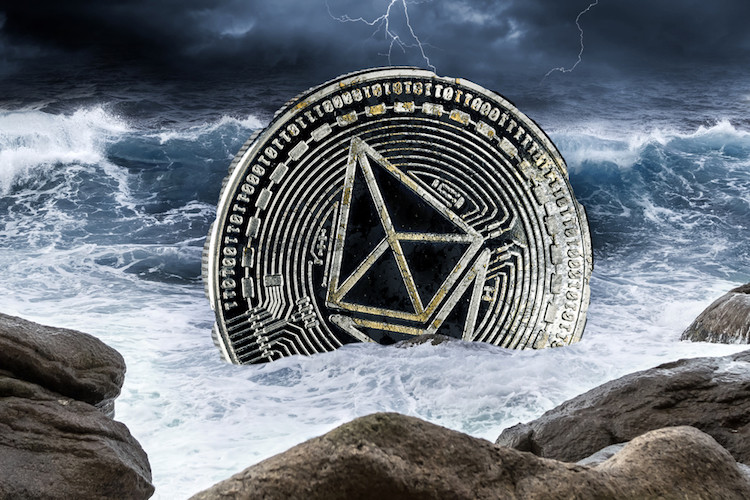 A couple of weeks ago, the community was hotly wondering – who brings down the Corn? And now Ether is on the line. It seems that some world behind side scene is trying to break the leading cryptocurrency. Trying to decide finally which of them to choose and take as the main one. And it would be good for us to find out this too on time!

Now it is almost forgotten, as we have been shocked by the fall, that for a long time the cryptomarket was in the flat. No wonder that speculators (in a good way) lost patience. After all, “rise” in such a market is impossible. This is what some experts associate with the corn fall. In particular, charming and attractive Meltem Demirors, Chief Strategy Officer at CoinShares, from London, says directly: “Perhaps the situation served as a catalyst for the total sales of bitcoins, which caused the digital assets market to lose as much as 20 billion.” Due to the specific nature of her professional interests, Meltem Demirors singles out institutionalists and hedge funds as the main culprits. They supposedly decided to reduce the share of cryptocurrency assets in the process of redistribution of portfolios. However, Demirors notes the chilling behavior of the Corn when fork Bitcoin Cash happened. According to her observation, the same collapse was after the first hard fork of Bitcoin Cash in August 2017. Knowing the habits of the institutionalists, Demirors hints at the “tricky whale plot”, maybe they decided to open the cryptospace to new major players. Like, more players – more money.

Everything said by a London officer in a skirt to one degree or another can be attributed to the collapse of Ether. True, Ether is still not the leader of the entire market, but only the leader of the alts. Its fall leads to the fall of the alts market and to restore the leadership of the Corn. Still, all the same funds and institutions could pour Ether in the course of the redistribution of portfolios before Christmas. Why not? However, another factor is decisive.

“… You will deny me three times, Peter!” – Jesus Christ

According to SANbase (https://app.santiment.net/projects/ethereum), over the last month there has been a huge sale of ETH by the teams that conducted the ICO. This is not the end of everything, of course. Developers are trying to save the collected money only. But this process looks dramatic. Even more dramatic – in anticipation of Constantinople, postponed already once for unconvincing reasons. Everyone wants Ether with 1 M TPS, as promised by Vitalik Buterin. But not everyone believes in it. The fact is that cost of Ether mining is in the range of $ 100-130. And with a rate below $ 100, many miners can do what soldiers-deserters did during the Great (First World) War of 1914-1918: Bayonet into the ground! As a result of the imposition of several factors, the rate of Ether falls even faster than the rate of Bitcoin. They deny Ether, some once and some even three times.

Who picks up the falling banner?

Many are ready to proclaim the sacramental – the King is dead! – Long live the king! But who is the king? Numerous “killers of Ether” of great cheerfulness do not show – and promising EOS, and NEO. At the same time, the community began to shill “some kind of Tron.” Well, really – some Tron! His founder and CEO – for a minute – Justin Sun! Neither more nor less – the former chief representative of Ripple in China. Tron (TRX) – perhaps modelled on Ripple – found its niche in the market – gaming and entertainment content. Not the same as banks and financial institutions. But still quite monetary and promising area. Its blockchain, according to the company, is already making those 1 M TPS. And by the way, the token is fully compatible with ERC-20. Moreover, the Tron has two standards of its own – one cheap (TRC-10), the other fast (TRC-20). The coin, which is not a year old, has already reached the 10th place in the Coinmarketcap rating! And behaves with calm dignity, judging by the chart. The surge at the May – June border is associated with the launch of Mainnet.

Tron with 10th place, of course, is not a leader. But we have already seen how strongly and quickly the composition of the leading three and the five changed. Even if you do not believe in conspiracy theories, it is difficult to get rid of the idea that some powerful forces are pushing crypto to the breaking point. That one coin, then the second, then the third. Something they’ll choose, these forces.