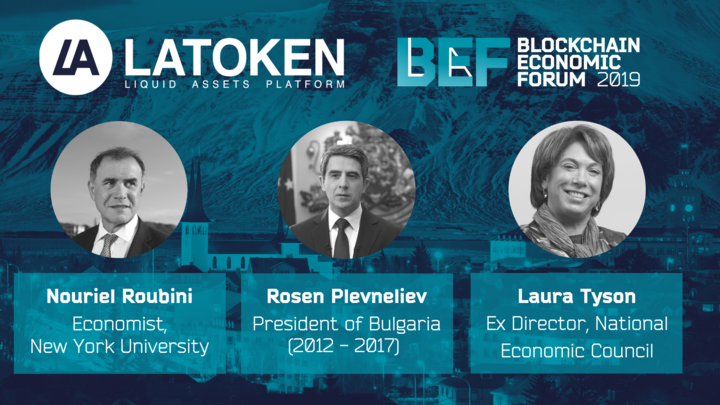 Stay in touch with the major economic trends of 2019 visiting the 4th Blockchain Economic Forum with Latoken – the #1 exchange in liquidity for new tokens!

Blockchain Economic Forum in Davos, Switzerland is starting extremely soon on 24th January. During three days of the event there will be a plenty of interesting discussions. Nevertheless, there will be a special one: top blockchain critique Nouriel Roubini, president of Bulgaria, $20B+ funds are gathering to discuss the emergence of blockchain central bank on LAchain. Latoken is going to be represented there by the CEO – Valentin Preobrazhenskiy.

In the spotlight of the World:

Davos is a tiny place where top politics, economists, bankers and other influencers gather annually to take part in World Economic Forum. The fact that BEF is held next to it proves the significance of blockchain technology for the global economy. The decentralized future is going to be discussed by more than 100 high-profile economists, regulators, officials, and business leaders from all around the world.

Other recognizable speakers to come:

An Agenda For The Future

The first day of the Blockchain Economic Forum will bring attention to two of the hottest topics in the cryptocurrency and blockchain world: tokenization and regulation. Panels:

Day 2: Board of Governors for The New Financial System

The second day of the Blockchain Economic Forum will take a more practical approach. Panelists will work on the fundamentals for a global central bank, its currency and the structure necessary to make it viable. Panels:

Networking is a cornerstone of the Blockchain Economic Forum. Startups that presented their projects at BEF’s previous editions have raised over $400 million in investment.

The Blockchain Economic Forum in Davos will be no exception. Multi-billion dollar fund managers, high-ranking government officials, Nobel Prize winners and top entrepreneurs will shake hands at the LATOKEN Networking Reception on January 26 at 21:00.