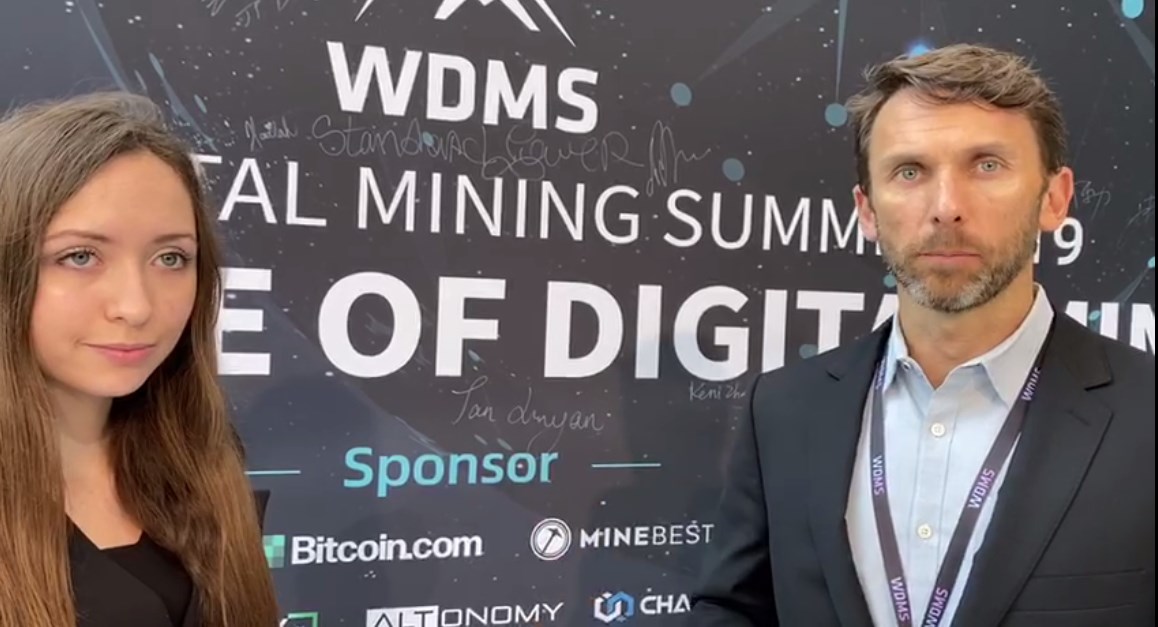 Ann Tutova and Coinstelegram team at World Digital Mining Summit (WDMS) in Frankfurt, Germany represent a new exclusive interview. Now this is a chat with HyperBlock CEO Sean Walsh. HyperBlock is one of the largest in North America diversified crypto assets enterprise and operator of the largest data centers.

– How did you get involved in cryptocurrency business?

– I first read about bitcoin in 2012. And it really resonated with me because I had been involved in three of the primary aspects of bitcoin. One was social networking aspect of bitcoin so I’m co-founder of Fotochatter, mobile photo sharing app and mobile social network which grew from nothing to over 5 million users in under 24 months. Second was E-commerce, online business which was my primary career focus. And the third was monetary systems and the global financial system, essentially – the stock market activity that I was involved in. I was very heavily involved in short selling, stock market activities during the financial crisis in 2007-2008. I really gained a deep appreciation and importance of monetary system. So I read about bitcoin that was a whole essence of three aspects of my previous career and all come together in one place. And I began mining bitcoin in 2013.

– Tell please more about your activity in HyperBlock. What are the areas of activity?

– HyperBlock has essentially 5 business units that we’d built inside the company. The first is HyperMines division which is the standard data centers deals with in USA, Canada and other parts of North America. Second is what we call HyperBox, that are modular mining units we build in data centers, half a megawatt to two megawatts in power capacity. Our third division is called HyperTrade, this is our proprietary trading software. Then we have HyperCloud – cloud mining business in conjunction with bitcoin.com, which is a long time business partner of us and that we are very happy working with since 2013. And finally we have HyperLabs which is R&D lab, focused on stimulating the adoption and usage of cryptocurrency, which is really a fundamental building block that we as miners need to support our industry.

– As soon as you build Data Centers what do you think about immersion cooling?

– Well, I’ve seen a couple of companies that are fond of immersion cooling systems with mineral oil or another fluid. Though we haven’t began testing it, but it certainly in our roadmap because particularly in modular data centers that we build now, if we could squeeze more hash power into a smaller space – it will obviously increases the value generally. So we’re planning to begin testing it.

– Are there any other exciting plans for HyperBlock?

– I think it would be pretty exciting with proprietary trading software, work with stimulating cryptocurrency adoption, with mining units, with general expansion. We always keep a few secrets, because by diversion effect of publicly traded company, we have to be careful about how to disclose pieces of information.

– What are the biggest challenges you faced while building your business?

– The biggest challenge that we faced is the biggest challenge every miner faces. And that is the fact that we exert almost no positive influence over the price of cryptocurrencies. Miners generally exert negative influence on the price because we as a collective turn to mine coins and then sell them in the market. Even if the market is up and we want to keep some – we need to sell to cover operative expenses. That is a pretty destructive influence on the market which means the difficulties for all mining companies. HyperBlock is not different because we have to deal with the basic reality. That is specifically why I’m looking for partners to join us – miners, bitcoin, exchange and miner allies – to begin investing money into customer adoption and stimulating usage of bitcoin.

– As we know you manage an investment fund Redwood City Ventures. Can you tell more about that?

– This is a very small venture type investment firm, that I started back in 2015 when I left private equity firm. I wanted to focus on bitcoin and I expanded to other cryptocurrency projects. And so I looked for as innovative projects have rather short run away to some type of cash flow. And we make small investments primarily in North America and some investments in other parts of the world. We tried to help with some advices and services as well as we had some years of experience.

– And what was the most interesting project?

– The most interesting I guess as well as I’m focused – is HyperBlock. That I’m most excited about right now. I was very happy with accomplishing people to help taking a company public in Canada last year. And I’m investing a great deal of my time and even money into stimulating HyperBlock growth, that we can realize substantial returns for all the investments in our company.