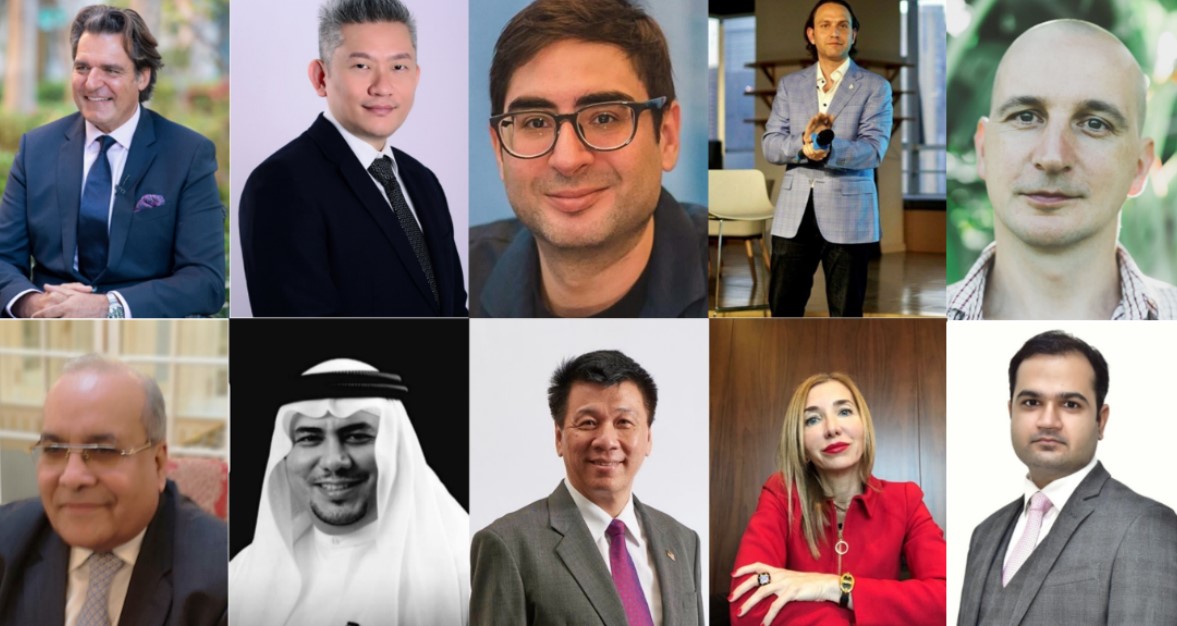 From top left to right Chairman Anthony Ritossa, CEO Malcolm Tan, Co-founder Felix Mago, Founder Yves La Rose, CEO Meinhard Benn, Chairman Waheed Qaiser, CEO Abdulrahman Al Ansari, Co-founder Stephen Chia, Co-founder Francesca Greco, Lawyer Sahil Verma, ‘Pave the Path’ provided
Goldman Sachs, a major financial company in New York, USA, has been recognized for its ability to predict the future since it proposed the concept of “BRICs” (Brazil, Russia, India, and China), which refers to emerging economies with high growth potential, in 2003. Afterwards, global investors have been interested in whether the GES (Growth Environment Score), which Goldman Sachs evaluated around 2005, can be realized in the future. The report, proposed by Goldman Sachs, predicts that if South Korea achieves economic cooperation with North Korea, it could go through rapid growth by 2050 and then grow into a G2 country with the second-highest per capita income in the world after the United States.
Based on this information, the Eulogian Foundation has recently been actively preparing to invest in Korea by dividing three cities in Korea, including Busan, Jeju Island, and Paju into three stages of the investment. Starting with investing in Busan, the second-largest city in Korea, the goal is to complete the Eurasian railroad through North Korea to Europe and to open a mutual economy between North and South Korea. Through the Deputy CEO of the Eulogian Foundation, Mr. Bruce Jeong invites internationally influential people to Korea for the World Investment Forum in Busan around October, and the foundation will participate as the main sponsor.

In particular, Busan, the city where the forum will be held for the first time, is the world’s first Regulation-Free blockchain Special Zone. In addition, the Eulogian Foundation is drawing attention as it plans to directly invest in the redevelopment of the North Port, the creation of the Centum 2 district high-tech industrial complex, the construction of a gateway airport in the southeastern region, and the 2030 World Expo, which was previously planned in Busan, South Korea. In the future, if foreign capital attraction and global companies are secured in the city planning of Busan Metropolitan City, it is expected that it will be completed as a second city with more speed.
The Eulogian Foundation is currently participating in the Central Bank Digital Currency (CBDC) project in each country around the world. Representatively, the foundation is participating in the Swedish National Bank’s e-krona pilot project, Vietnam Central Bank’s CBDC project, People’s Bank of China’s digital yuan project, Lithuanian Central Bank’s LB Coin project, and Philippine Central Bank’s CBDC project.
The following is the 2nd list of confirmed attendees of the World Investment Forum to be held in Busan in October.

Chairman Anthony Ritossa is the current Chairman of the Ritossa Royal family and continues the family business dating back 600 years to the Venetian Empire in Europe. He is mainly conducting conferences related to new business and conducting direct investment worth 500 million dollars. He was recognized for his distinguished Wall Street career in New York through over 30 years of investment experience in international financial markets at Nomura, Barclays Bank, Morgan Stanley, and BNP Paribas.

Malcolm Tan is a lawyer and entrepreneur based in Singapore. He is also the founder and CEO of Gravitas Holdings, the leading consulting firm of ICO and ITO in the Singapore’s blockchain industry.

Felix Mago is Co-Founder of FUTERIO, a Europe-Asia Blockchain and ICO Hub. He is also the author of the “Bitcoin Handbook.” Felix is currently the co-founder of Dash Embassy Thailand as well as Dash Next project

Yves La Rose worked for the Canadian Federal Government as an economist and a policy advisor.

He left national politics to pursue his passion of establishing EOS and is currently a CEO of EOS block producer EOS Nation.

Waheed Qaiser has held executive management positions at Citibank, HSBC, UBS, IIBU, IBB, QCC and MaximLLP. He is also the Co-Founder of the first Islamic bank in UK that was licensed in 2004.

Abdulrahman Al Ansari is the CEO of Apollonia Capital Advisor. Previously, he was the CEO of Fairfax Middle East, a fully-fledged investment bank in DIFC. He was a global alliance partner of Morgan Stanley in the Mena region

Stephen Chia is a regional director of the Nem.io Foundation and Nem Malaysia, and is a member of the Southeast Asian Council. He is also an investor with companies in real estate development, fintech, blockchain and software. He provides IT services in the ASEAN region and currently serves mainly as a business and strategy coach. He is also investing in a Cambodian company with wallet technology powered by blockchain technology.

Francesca Greco is the Co-Founder and Co-CEO of X8 AG, one of the most innovative fintech companies in Switzerland. She has expertise in digital finance and regulation with 20 years of experience and plays a leading role in financial services in relation to EU and international regulators.

Sahil Verma is an international lawyer specializing in business law, investment law, fintech, international law, and dispute resolution. In the past, he worked as General Counsel of market-leading conglomerates in the Middle East and India.

According to Dean Yun Hyuck Jo, CEO of Pave the Path, who is in charge of this project, ”We have been planning and proceeding with the World Investment Forum since early this year with the support of the Eulogian Foundation. As shown above, we received their intention to attend the forum in advance, but we are keeping a close eye on the COVID-19 domestic and international trends in hosting the event until mid-August,” he said. “If Corona19 continues to spread in each country of overseas attendees, we are preparing a plan to convert the October event to an online conference and postpone the offline event to the first half of 2021. However, the investment in Korea through the Eulogian Foundation will be conducted regardless of the forum,” he added.