Climate Change is one of the greatest challenges of our time.

But what if we could come together as a community and make a difference now?

It takes 25 years – a generation – to transform an industrial sector and all the value chains. To be ready in 2050, EcoWatt does this now using the power of the blockchain.

EcoWatt puts renewable energy assets on the blockchain to disrupt the climate change movement by making green assets accessible to the blockchain community. By buying and staking the EcoWatt Token, the community directly participates in the growth of zero carbon power plants that generate power, earn revenue, reward staking and further increase the value of the token.

EcoWatt is set to create a green energy equivalent to DAO, the first community-owned energy company. It is the audience that will influence the company’s decisions more than shareholders and investors.

The EcoWatt tokenomics is extremely simple – it is a finite supply of ERC-20 tokens backed by renewable power assets. The only way to mine 1 billion ECW tokens that will ever be issued is to physically build 1 billion Watt of renewable energy generation. So the basics are quite straightforward: 1 ECW = 1 Watt of renewable energy capacity during the Token mining. Once mining is concluded the growing asset ratio in relation to the fixed token quantity increases the Token value steadily for years to come.

After the first oversubscribed private sale, the second private round with a combined target of 8 million Euro was launched on the Tokeny platform running parallel with a traditional 30 million Euro Green Bond issue on May 15, 2021. The campaign will last until June 15, 2021, before opening the mining pool for the public in July 2021. 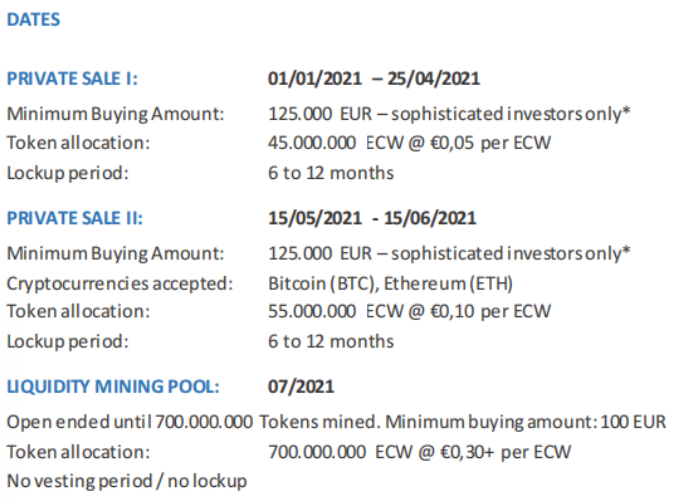 According to the World Economic Forum, in 10 years 10% of the world’s GDP will be stored in blockchain, so it is very important to bridge blockchain and energy industries as soon as possible.

EcoWatt is building the first community dedicated to the climate change movement, that will be able to make an impact independent of institutions and governments.

EcoWatt does not plan to stop there. Next to growing the Token value by building assets and rewarding the staking community, EcoWatt will also re-invest proceeds into social impact and food security projects that will support thousands of families and plant millions of trees in cooperation with trees.org.

The initial target is to create an asset portfolio with a Token market cap of EUR 1,20 billion by 2022 and save 750.000 tons of CO2 emissions every year for the foreseeable future.

EcoWatt is one of the few blockchain projects that have Tokens backed by physical assets that bring real value and strives to make our world better. And it is right around the corner now.

Tokens are minded using a proof of stake API tracking installed Watts on a public ledger. For this reason, even the founders receive no Tokens in advance and must achieve 100% of the mining target to receive 100% of their Token allocation.

The ECOWATT team consists of passionate professionals with extensive experience in renewable energy, real estate development, finance, and digital solutions.  The company is headquartered in Dublin, Ireland, and has subsidiaries in Bucharest and Istanbul.

They are advised by leading blockchain market experts in the areas of technology, media & listings as well as finance to ensure that there is a solid bridge between the real world EcoWatt green assets and the blockchain.