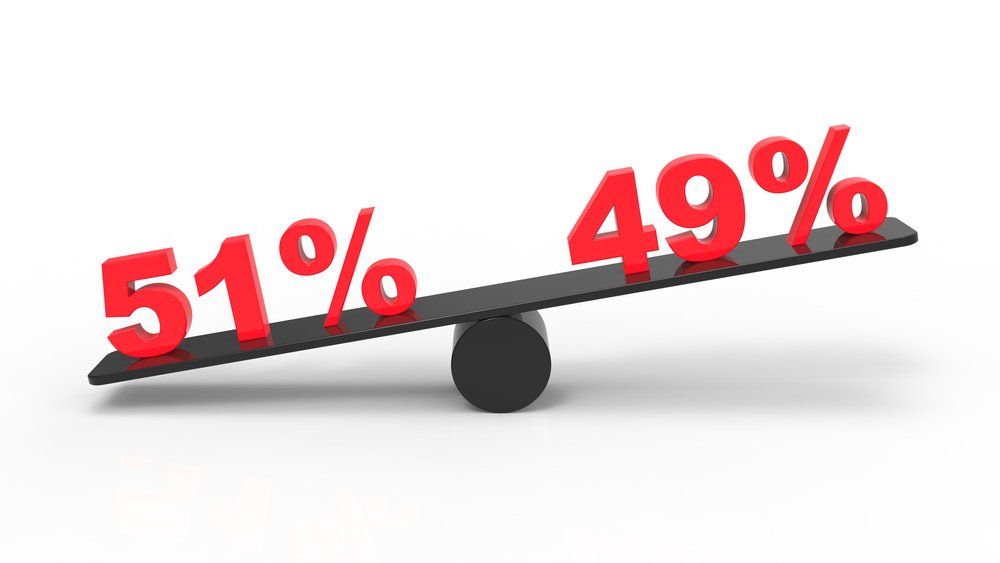 A 51% attack is an attack on a blockchain by miners who would take control of more than 50% of the network’s mining hash rate, or computing power.

Attackers would then be able to stop new transactions from being confirmed, giving them the ability to stop payments between some or all of the blockchain’s users. They would also have the ability to reverse transactions that have been completed while they had control over the network, which would mean they could ‘double-spend’ coins (steal the coins back mid-transaction and use them again for another transaction).

A 51% attack would almost certainly not grant its perpetrators the ability to create new coins or make changes to old blocks, so a 51% attack would most likely not bring an end to blockchain-based currencies on its own even if it can be extremely damaging.

Hitting 51% network control does not guarantee a successful network takeover. This is simply the point where success is more probable. One could attempt this kind of attack with far less network control, but the chances of successfully pulling this off would be less.

The greater the number of past blockchain transactions, the more secure a particular blockchain would be against these types of attacks. In reality, an attacker would only be able to alter transactions within the previous few blocks. They would also not have the ability to create new coins except those received as block mining rewards as usual.

Is there a solution?

The development of a more decentralized network with a greater number of individual miners would be able to provide a strong base for defense against the chance of a 51% attack. The larger mining groups are able to make use of specialist ASIC mining rigs and ASIC-resistant algorithms. Coins that would allow CPU mining are also realistic defense mechanisms against 51% attacks.

The Proof of Stake (PoS) consensus mechanism is also less susceptible to this kind of attack. This is because purchasing of more than 50% of all the coins available on a network is usually far more expensive than trying to take control of 51% of the hashing power. Any individual with a large stake in any network would be risking their own holdings by launching an attack on the network.

A 51% attack is certainly possible – especially given the rise of mining pools. However, the actual damage that can be caused is minor – though enough that it would create a panic that would seriously impact attacked coins’ potential function as a currency. At the current network mining difficulty levels, not even major governments could mount a 51% attack without serious difficulty.