This story is a story of verbal war with money bet between Jimmy Song, Bitcoin Educator, Developer, Entrepreneur – and Roger Ver, known as Bitcoin Jesus, the owner of bitcoin.com, co-founder of Bitcoin Foundation, who invested over a million dollars into bitcoin related startups including Bitinstant, Ripple, Blockchain.info, Bitpay and Kraken.

Recall, Coinstelegram has been published on one of the most dramatic rounds of this war (A Bet On $ 1M ). Now Roger Ver has “accepted” latest terms suggested by Jimmy Song, but called him a liar and a coward since he rejected his two betting proposals. In turn, Jimmy Song through Twitter laid out the entire story of their cold war (because without the use of weapons), but a very hot war – according to the passions.

Jimmy Song recalled the very first statement of the opponent in May 2018 in the Independent. Bitcoin Jesus said that even before the end of the year bitcoin would fall under the onslaught of the Ether and even Bitcoin Cash would beat it until 2020. Jimmy doubted that Ver himself believed in what he said. And he asked him in no uncertain terms on Twitter – would he put some money behind his words? Roger confirmed that he was ready “to keep his word” and could put money, but only for his words: “Ethereum could overtake bitcoin by the end of the year and bitcoin cash could do the same before 2020”. And not for the headline that the journalists invented: BITCOIN JESUS PREDICTS ETHEREUM WILL BE MOST VALUABLE CRYPTOCURRENCY BY END OF YEAR. As gambler, Jimmy immediately offered 2 bets at once: on the Ether – if 01/01/2019 Ether beats the bitcoin as for capitalization, he is ready to give Roger 500 ETH. But if not – Roger will pay him 100 BTC. The rate on BCH is as follows: if on January 1, 2020, BCH overtake BTC, then Jimmy will pay 250 BCH to Roger. If not, he will receive 250 BTC from him.

But Roger immediately stopped these conversations: “Do you understand the difference between could overtake and would overtake?”

Jimmy began to sense a weakness of Roger. And he continued to get in his own way – quite reasonably, as they say: “The guy said – the guy did!”

Obviously, even then, in May, Roger realized that he said too much. Well, you can say a lot in the heat of conversation when they are listening you with their mouth open! And he tried to reason his opponent. Well, you are a smart fellow, we both understand that Ether can overtake Bitcoin, and so on – blah blah…- without “hostile or rude”.

But Jimmy stood his ground: Do you think it is imminent or no? – was his question. – If you do – put your money where your mouth is. If you don’t – tell me how the journalists misquoted you?

– You are beating the dead horse, – answered Roger (Jimmy looks like a cowboy from the Wild West in his lovely hat). – By owning Bitcoin.com I have more skin in the game than just about anyone.

Jimmy concluded: What’s happening is that Roger’s being a weasel, trying to manipulate the market by saying one thing, but also using the “I was misquoted” excuse when pressed to make a bet. This is a pattern I’ve seen from him quite often and a tactic politicians use.

So this is it – Live and let live, as they say. But it wasn’t! The sequel goes on!

On Sept 2018 in his debates on CoinsBank Cruise the theme was up again! And now the conditions became more reasonable. Roger has suggested the bet for 10 years from now and for $1M. As for Jimmy, he says: “The bet he has proposed is lacking teeth and puts as little skin in the game as possible.”

Hot! Very hot! Though even those CoinsBank Blockchain Cruise Debates “got a little heated” – as they said. And since now things got too hot – it smelled of blood! Jimmy has confessed:

– I wanted to have a bet that would actually make him put some real skin in the game. And to denominate in BTC as to actually make sure it hurts him.

So Roger’s answer became rather official:

– I want to bet $1 M USD payable in whatever crypto the winner wants at the time of the bet conclusion. I would accept making our bet public on Longbets.org and using the repetitional enforcement from that. And to sign with an address holding over $10M in crypto.

And personal: “My own risk of not being paid is much higher than yours” (!).

After two more rounds of this e-mail exchange there appeared some more condition:

The last Jimmy’s proposal is almost the same that Roger has proposed. He said: “I accept the bet under two conditions: 1) $1M has to be transferred to the winner within 14 days of the conclusion of the bet. 2) Winner donates a minimum of 25% of the proceeds to charities as the winner sees fit”. 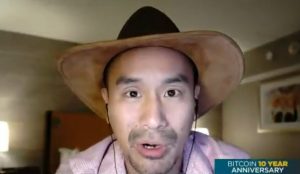 It seems that the debates have stalled and turned into a struggle of personal ambitions irrespective of the forecasts of the crypto market. Obviously, Roger realized that he said much and maybe he would gladly take his prediction back. Jimmy, with the manner of a ruthless poker player, intends to get a real money from Bitcoin Jesus who has failed – Jimmy think. And Roger as the owner of an influential crypto resource has to worry about his reputation.

Roger Ver has showed not once that $ 1M is a reasonable amount for him. He invested that summ of money in crypto projects and even donated to charity. Even now, in anticipation of a loss, he wants to send part of the sum beyond the pocket of Jimmy Song – to charity.

Jimmy wants blood. And he wants money. He denies charity – ostensibly as a trick to lower taxes.

But what about the cryptocommunity? In the heat of the war, both sides somehow smoothly moved away from assessing the prospects for Ether cap. And from the predictions about whether Ether will overtake bitcoin or not? Apparently, no one doubts that sooner or later this will happen, and long before 2028. And it is a completely different prediction about BCH and if it overtake BTC: no one is ready to bet big money on this.

Anyway – Happy Birthday, Bitcoin! And thank God for you!