Emotiq is announced as a powerful, decentralized blockchain with Proof-of-Stake (PoS) consensus, scaling through sharding, and natural language smart contracts.

There are 3 main problems with traditional blockchain: scaling, privacy, usability. It is stated that Emotiq is a blockchain with scalability and privacy. It combines the results of researches in distributed ledger technology with natural-language approach to smart contracts. Smart contract is computer program that detail the conditions under which a transaction or transfer of tokens will occur, and executes them accordingly. Till now smart contract as computer program is only readable by computer, not human. And therefore it is not so easy to use it. The Emotiq solutions is smart contract language Ring for non-programmers and those obliged to program by necessity. Smart contracts becoming readable and usable by humans.

So – what is Ring? Is it another one high-level programming language? It seems – it is kind of super- high-level programming language. Ring is smart contracts in plain English – they (the authors) say. With Ring, Emotiq’s natural language for smart contracts, non-programmers can create smart contracts to satisfy a wide range of agreements and applications and test them interactively. Ring compiles to a lower level Ring virtual machine (VM) which also runs most, if not all, smart contracts written in Ethereum Solidity. Ring is inspired by Zork – a classic interactive fiction computer game – and it is intended that Ring will be just as fun, exploratory, and open-ended as Zork.

So – Emotiq pretends to scale to VISA-level throughput (VISA handles on average around 2,000 TPS). It features an innovative approach to smart contracts through Ring, plain English smart contract language, as well as partial compatibility with Solidity to accommodate transitioning projects.

Well, as for blockchain – it will be scaled by means of sharding – as in many other projects. “Emotiq builds on top of OmniLedger and features horizontal scalability through sharding. OmniLedger is the first highly scalable distributed ledger that can preserve long-term security under permissionless operation, ensuring correctness across large, scalable networks of nodes “.

Additionally to its own token EMTQ Emotiq platform provides child tokens. Child tokens allow ICOs and TGEs to be created and run on the Emotiq blockchain, to leverage the platform’s unique features and capabilities. These tokens are exchangeable back and forth with EMTQ through Emotiq’s built-in decentralized exchange (DEX).

It is stated that Emotiq intends to attract $ 60 M through the combination a private sale and a public Token Generation Effect (TGE). To say truth, till now it is no difference between TGE and ICO. And the choice is determined solely by the intention to avoid problems with regulation. The token price and the amount of funds are carefully selected to enable the team to reach goals in project development and to start (“jumpstart”) the Emotiq ecosystem. It is generated almost “standard” amount of tokens – 1B. And they are distributed as follows: 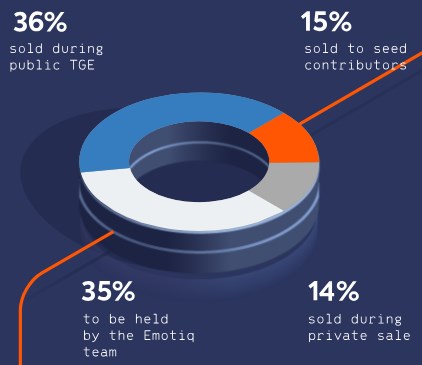 Token Issue: WITHIN 30-60 DAYS AFTER CONCLUDING THE PUBLIC TGE.

Meanwhile, the native Emotiq token (EMTQ) has deflationary economics, with the token supply slowly decreasing over time. This is accomplished by burning a fixed percentage of yearly transaction fees, with the exact mechanism be described in the upcoming technical paper. The goal is to ensure an increase in the value of the EMTQ token over time and serve as a security mechanism, to prevent attacks on the Emotiq network.

Joel Reymont, CEO – a seasoned hacker and blockchain pioneer. He started his career on Wall Street and have twenty-five years of diverse software engineering and management experience. Joel was previously Chief Technology Officer at a Top 100 cryptocurrency and blockchain company, where he earned a reputation within the community for his fearsome execution power. Joel has acted as Director of Prime Brokerage Technology at Deutsche Bank, has run offshore development teams, and has built many scalable and fault tolerant systems over the years.

Vladimir Lebedev, VP of Engineering – has over twenty-five years of experience in managing technology in fintech, telecom, and media companies. His pioneering credits include creating the first FidoNet node in Soviet Union, the first remote banking application using asymmetric keys cryptography in Russia, and the first ISP in Western Siberia. He was CTO of the Russian stock exchange, where he created its trading system and network infrastructure. Vladimir has held executive roles at VEON (a telecom company with over two hundred millions subscribers), Sberbank (the biggest bank in Eastern Europe), Moscow City Telephone Network, Orange Business Services, Lucent Technologies, and Mail.Ru Group (the biggest Internet-media company in Russia). He has established two own companies, CPM and Cybertonica.

Emma Cooper, COO and Global Community Manager – worked for many years in counterterrorism for the US Department of Homeland Security, before which she was a lawyer in the US, specializing in private placements and corporate law. She graduated from Virginia Commonwealth University with a BS in Mathematical Sciences, and holds a JD from the University of Richmond School of Law.

David McClain, PhD, Chief Rocket Scientist – a rocket scientist. Trained in theoretical and observational astrophysics, in addition to computer science, he has five decades of unique programming expertise. David has served as a Principal Scientist in the aerospace industry where he built airborne LIDAR systems for underwater mine detection, and was a Senior Scientist on the Raytheon ExoAtmospheric Kill Vehicle (EKV) program. He is a true expert in numerous computer languages, including Lisp, and an authority on signal processing, image processing, guidance and navigation, radio-frequency and infrared target detection systems, and target tracking. 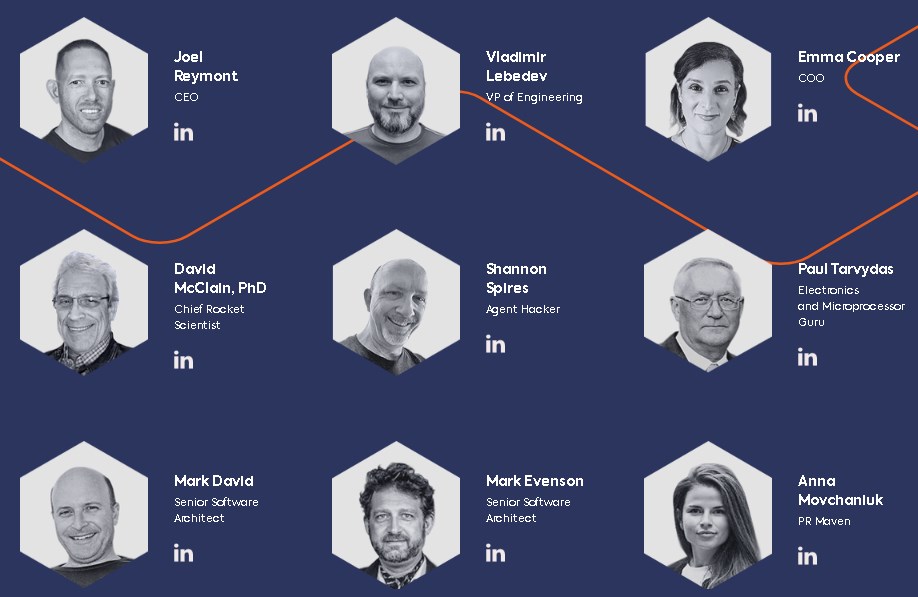 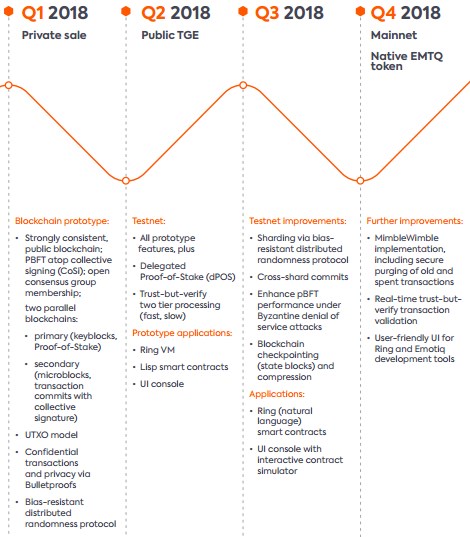 EMTQ tokens are used to pay for any resources consumed on the platform (e.g., sending payments, paying for services, or creating child tokens and launching ICOs). EMTQ child tokens are a simpler version of the Ethereum ERC20 token. They’re easy to create, and, coupled with Emotiq’s intrinsic scaling capabilities, can be used for large-scale token generation events and sales. Child tokens can be freely exchanged for EMTQ, enabled through Emotiq’s built-in decentralized exchange (DEX). Emotiq also provides the capability to exchange EMTQ with BTC and ETH via cross-chain atomic swaps.

Emotiq’s development will continue beyond launch in a number of directions:

The project is governed by undisputedly one of the most powerful and interesting teams ever, with a staff of experienced professionals, which is rarely seen. In it there is a Russian scientist and entrepreneur from the world famous Novosibirsk Academgorodok, a rocket specialist and even an anti-terror lawer. But, despite such a spread of interests, the team clearly has a full set of competencies for solving all ambitious tasks – from creating a language of smart contracts to creating a super-blockchain. Marketing and PR are traditionally given to ladies (one of them – also with a Russian or Ukrainian surname). It seems that this is not the main task of the project – a big hype. But China Community Manager will work to help the ladies, his task – posting in Chinese social networks. So there is a stake for the support of the Chinese, the most massive cryptocommunity.

The project is quite feasible, with serious ambitions and aggressive market behavior. Roadmap is also very specific, judging by it – the implementation schedule is well-calculated and it is rather dense. In particular, already in the second quarter the virtual machine of the smart contracts language Ring is launched, and in the third it will already work in full force. In 4 quarters, mainnet is started.

The ecosystem is expected to be extensive, including the ability to generate additional child tokens and exchange them on the built-in decentralized exchange. This approach provides additional stability to the EMTQ token.

A few minuses: embarrassing lack of advisers, partners, investors. Perhaps they are not necessary for such a strong team?

The solutions offered by Emotiq can indeed have a beneficial effect on all crypto-community. And on the rise of EMTQ token price too.