A compact network with global coverage – so it looks. GoNetwork creates an inexpensive, small and scalable network for Ethereum, which will be used by mass mobile and desktop devices and web platforms. The mission is to accelerate the process of mass introduction of crypto-currencies, attracting consumer markets to the digital economy.

GoNetwork implements the first secure decentralized virtual trading platform. It is said too loudly. In fact, this is about the mobile output in the blockchain. If to delve further into the confusing description, one can assume that all the declared advantages of the project will be realized due to the fact that communications will be implemented over the Ethereum network. And when “the two sides come to an agreement” – only then they enter into transactions. In essence, the authors of the project promise to solve the most important problems of the blockchain: low speed and high transaction costs. Allowing transactions outside the GoNetwork network would seem to solve the problem. And at the same time creates a demand for GoToken (GOT).

It is rational grain in this. But nothing is said at all about the security conditions. And this is the first thing that one would like to worry about with this scheme.

The authors see their advantages:

Due to transactions outside the block, the cost of the operation will be several orders of magnitude lower – according to the calculations of the authors. Although this is not a calculation – but an expert evaluation, rather.

The ultimate goal is to create an infrastructure for scaling Ethereum. In this case, the reliability will be supported by the GoNetwork network and its tokens.

The project will implement two existing solutions of the authors.

GoExchange – a solution for managing virtual assets in gaming ecosystems, including on mobile platforms. With its help, players can buy and sell virtual goods in gaming systems. GoExchange is being implemented now in all games of the company Infinidy (this is the company of authors of the project, about it – below, in the Team section)

The second solution is Pocket-open-source software. The main purpose of Pocket is the opportunity for parents to control the expenses of their children. Obviously, the ones they carry in the gaming environment. The application is integrated with a debit card, the reasonable use of funds is controlled by several parents (this is also not very clear – two or more parents?)

It is also stated that Pocket can also be used to pay for products and services. This is closer to the topic. And besides, Pocket provides money transfer between users. Several amusing payment mechanisms have been implemented: a virtual cash desk on one terminal receives payment from another – if it is simply brought closer. Security is also provided by the fingerprint scanner.

There is no Whitepaper on the official website of gonetwork.co. This is a big rarity for the ICO. Whitepaper is usually the main source of information about the project. Most convincing.

But there is a section on hiring. To avoid rumors, it probably has a postscript “We are always hiring!”. But this is still an indirect evidence that the team hasn’t solved the issue with the developers completely.

Many times on all resources the warning about possible scam, fake groups and sites of the project (“With success comes interest from bad actors”) is repeated. This kind of information is comparable in scope with the very description of the project. It is also clear why this is done – for marketing.

There is not even a Roadmap.

In the investigative bodies in such cases, it is usually stated: “The client is confused in the testimony!”

Type of the token: ERC20

Date of sale: not declared

Whitelist: Yes (The whitelist will be closed once it reaches max capacity).

Price of the token: not declared

Amounts for investors: from less than 100 USD to 100 thousand USD or more.

AirDrop is conducted – it’s enough to join the telegram-channel, share facebook and fill out the form with ETH-wallet. 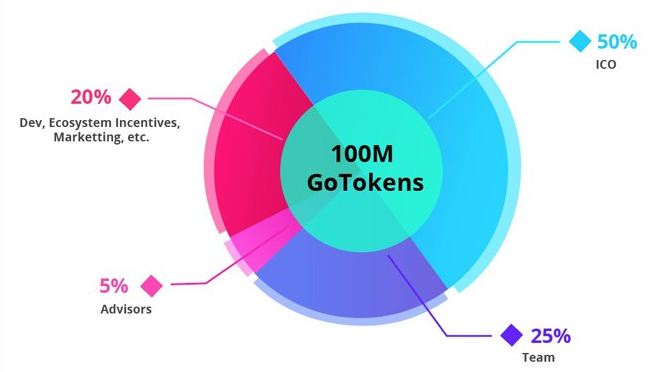 Rashid Khan (CEO of GoNetwork): programmer and CEO of the gaming company Infinidy

They continuing to play. Developers of children’s games of not high level of complexity felt that they were able to solve serious adult problems. And they make it as a joke.

There is no technical justification, or economic. No experience in blockchain projects. No Whitepaper, no Roadmap. There are not even serious advisors.

Of the pros – two apps for the gaming industry that are not so complex apps. And the victory of the team in al Canadian contest ETHWaterloo World’s Largest Ethereum Hackathon.

The Canadian project, which is very similar to the bid “On the off chance!”