The collapse of the market has provoked (armchair) analysts to the most ambitious forecasts. They even remembered the prediction of Charlie Lee, the developer of Litecoin, that they would not celebrate much, because the market would fall by 90%. Did he know something? The market has really collapsed by almost 90% from the year highs.

Black days, which happened “like a bolt from the blue”, surprised analysts. Everyone need answers. And what answers can be if nobody understands what is happening? It remains only to calm, to bring down panic, to cite historical data and other dubious arguments, often – incoherent. For example, “look, whales do not leave the market – why should you sell your bitcoins?” Indeed, the holders of large BTC wallets are not in a hurry to sell BTC. So it’s clear! If you sell your pair of Corns- well, you lose $ 2-3 thousand, you can survive. Whales have incomparably large losses! Especially if they entered at high levels.

There is another point of view. They say – what happened is the result of market manipulation! Bitcoins are simply putting out, with offering altcoins (shitcoins) in return. It is clear even to novices what will happen next: after the slightest upward movement of Bitcoin, shitcoins, which have now grown, immediately roll back. Yes, it seems to be true. But this is not the whole truth. Such games have been played and will be played, but with a decreasing part of the community, hamsters. And now, after a long flat, there are not so many hamsters on the market. Their fuss can’t crash the market so much.

Detractors of crypto do predict “the final fantazy” – final collapse of the market. Nouriel Roubini, who became famous for his accurate forecast of the crisis of 2008, maliciously notes: “With BTC down 80% from peak and other cryptocurrencies down 80% to 99% I rest my case that this crypto bubble went bust for good. I feel vindicated!”. Nouriel Roubini has always opposed crypto-revolution and criticized it as a myth. He even compared blockchain to a “glorified excel sheet.”

But there are voices from the other bank, and quite sensible. Chris Coney (The Cryptovers) reminds that crypto does not exist in a vacuum, it is already part of the economy. But in economics everything happens: “Speak about economics in terms of being an organism – it’s a system, where energy is like constantly flowing from one area to another. For example, if real estate is booming – gold might be crashing. If stocks crashing – government bonds might be booming and so on.”

Clever! And encouraging. And Chris is even more patriotic with regard to crypto:

– I do not believe that the crypto economy is under a systemic risk of collapse. While I am absolutely convinced that the traditional financial system is a very real risk of a systemic collapse and it could happen any minute. The truth is that it would have collapsed if the Central banks hadn’t stepped in and created ungodly amounts of currency injected it into the market to cause the mechanism to continue. And that actually brings us back full circle! The ungodly amount of currency that was created is primarily the cause of the huge over inflation in asset prices resulting in the “Everything Bubble”.

Everything Bubble! This is the term by the author of economic bestsellers Mike Maloney (GoldSilver.com). He claims that as a result of hyperinflation, the prices of traditional assets will collapse. Only gold, silver and … Bitcoin persist! 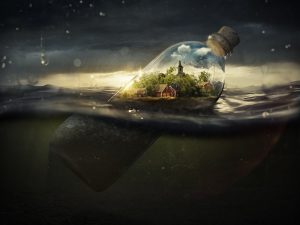