Perlin Network frames a trustless market around an untapped computing power supply consisting of highly underutilized computing resources to make supercomputing economically viable and accessible globally. The project is totally unknown, it is in stealth mode – no site, no Whitepaper, Telegram channel with 17K members is empty… But everyone from cryptocommunity wants to join the project. That why Coinstelegram publishes this review. 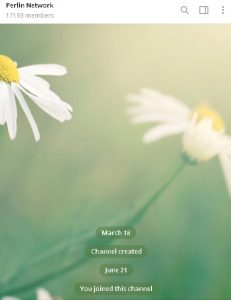 Perlin Network will serve as a marketplace for the exchange of computing resources between providers and customers. It will be launched in the form of a decentralized compute layer. Perlin is optimized to be a solution for developing dApps that require large amounts of computing resources and disk space, opening the door to a variety of potential use case scenarios. At the basis it is scalable DAG-based protocol with Avalanche consensus and a Byzantine fault tolerant protocol built on a metastable mechanism to achieve high throughput and scalability. This is good foundation on which to build decentralized applications – on authors mind. The Perlin Network commodifies underutilized computing resources into highly parallel batches of computing power, which can be utilized for tasks such as analyzing big data and training machine learning modules. The platform has three major components: a self-audited distributed ledger, a cryptographic proof of computational resources, and a framework for highly parallel blind computing. The Perlin Network will access the underutilized compute power of mobile phones, computers, and gaming consoles, quantifying the available resources of each participant with a cryptographic hash function. To establish a trustless computing market, resource providers must prove the amount of available compute at their disposal before offering it to customers; this is accomplished utilizing a Proof of Compute Availability mechanism. Conversely, by quantifying the amount of available compute power on the network, customers can purchase precisely how much is required for their task. By commodifying computing resources through a decentralized digital currency, the Perlin team tries to balance the supply and demand for computing resources on a global level. It is stated that Perlin is armed with a decentralized compute layer, supplying it with a high-throughput engine to process parallelized computations that horizontally scale.

Initial tests of Avalanche have produced speeds of 1600+ TPS on a network of 2000 nodes. The high-throughput achieved through the novel consensus mechanism makes it possible for the network to reach performance levels comparable to cloud-based platforms. As the need for computing power grows exponentially, the Perlin Network offers the prospect of a cheaper, decentralized alternative to customers requiring large-scale compute power. Beyond enterprises this pool of computing power is accessible to startups, researchers, and other small-scale participants.

Perlin is aimed at Testnet in September in accordance with the “roadmap” and the requirements of strategic partners.

PERLs are the native token of Perlin, facilitating the transfer of value and payments. Accessing the distributed computational capacity of the Perlin Network requires PERLs. Customers on the network register computational tasks with a fixed pool of PERLs for miners as a reward for running tasks. When registering tasks, customers can specify the parameters of the RAM and CPU required from the miners. Tokens are also paid as a reward to transaction validators. PERLs will initially be minted as ERC20 tokens but will be exchanged for native PERLs at the launch of the Perlin Network mainnet.

Perlin Private Sale starts June, 21 and will be held untill June 30. During this time the Perlin Token (PERL) will have a 20% discount and will be US 20c per PERL (reduced from 25c). This Private Sale will have a 30K ETH hardcap. On excessive demand Perlin will close Private Sale early. The sale of PERLs is at Perlins discretion and subject to legal considerations.

Can’t participate: US, China and Korea.

PERLs acquired during this Private Sale process will be subject to a 2-month lock-up from the date of listing on a cryptocurrency exchange which is within the top ten globally in terms of daily trade volume.

Dorjee Sun (Project Manager): a serial-entrepreneur who came to international attention after founding Carbon Conservation, a social enterprise for brokering carbon credit deals that resulted in the preservation of vast swathes of rainforest. He has a long history of startup success, having sold four companies he founded. He is also a seasoned veteran in the cryptospace and serves as an advisor to Santiment, Republic Protocol and Loki, among others.

Kenta Iwasaki (CTO): has an impressive history as both a developer and startup founder, with ample experience building distributed systems and machine learning. Before joining Perlin, Kenta worked with Naver Corp as an Artificial Intelligence Researcher and DJI as a Robotics Engineer. He is also the Founder and CEO of Dranithix, which develops internet marketing systems optimized through real-time analytics and machine learning.

Mizra Uddin (Business Development): a Harvard-educated VC investor with a focus on the tech field. Aside from VC, he has also served as an Editor at LinkedIn and Investment Banker with Citi. In the cryptospace, he is an advisor to EdenChain and OneLedger.

There are three additional developers who are in stealth mode too.

It is premature to rate this ICO while the team and project are still in stealth mode. Obviously superb hype which appears without any significant efforts from the side of the team speaks lot. High-level team, big pool of partners and investors plus really cool idea – all of these promises success to the project. At least two problems about Perlin. First: there are many DAG protocols and distributed computing projects now. Which of them will lead to market adoption – depends on business strategy of realization, not only on tech basis. Second: what about hardware producers, vendors? What will they do after the distributed computing networks will satisfy the demand for computing power? Will they agree to lose their profit? Doubtfully.

Perlin is very promising project. But as in many other startups, in its development strategy the realities of the global market are not taken into account. So – if they get lucky…