Strange calm, established for a few days on cryptomarket, analysts tend to perceive not as a transition to the phase of stagnation, but as a warning. Nicholas Merten (Datadash) defines the situation as «something that I refer to as the calm before the storm». Expert stated:

– This isn’t referring to a pentacle viewpoint of mine that the market is gonna rally to new highs or bitcoins gonna go all the way down to 5 or 4 thousand dollars. It’s more referring to the fact that as we’ve been in a sideways market for quite some time that we’re going to pick up a definitive direction in price over the next week, two or three weeks max in my opinion.

There are some of the predictions to be more determinative as to whether or not the market is going to move higher or to the downside again. Datadash claims:

– We can use a lot of different signs whether they be technical speculative or fundamental to determine what’s more likely… I’ve seen a very clear technical pattern where ever since back here in January of 2018 that we’ve had a line of resistance. We’ve had a high relatively close and then for the past two highs Bitcoin has been shot down to the line of resistance. It’s become obviously clear that Bitcoin is making lower highs and that again we’re looking to see signs of support on the other end which we have had so far we’ve been able to have a support at 6,000. Throughout 2018 we’ve held relatively up this levels sometimes specifically at 6,000, sometimes well above 6,000 and sometimes slightly below around 5800-5900. Practically speaking and along with it as well we haven’t seen at key support levels all the way down at 4 or 5 thousand. What is this signal? Well the signal is a descending triangle which in general terms is a bearish trend in markets. 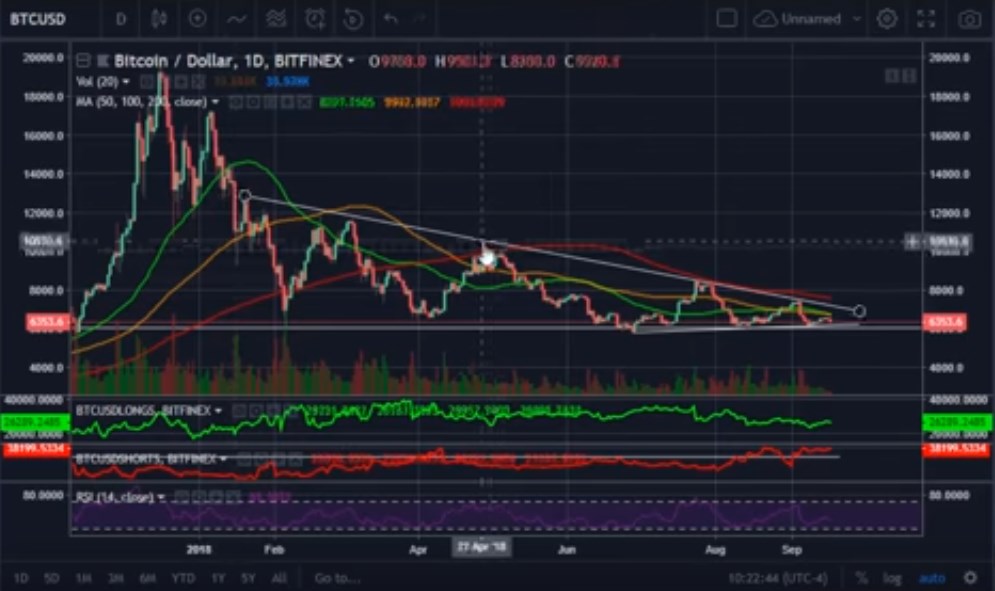 But nevertheless the Expert is very optimistic about altcoins. Datadash says:

– I’m not so much focused actually on Bitcoin. I think that we have to understand that Bitcoin itself can definitely be a key role to look at and that Bitcoin tends to lead markets. But there’s another player that I’m keeping it on as of recent that I think could really be a catalyst for carrying markets and that’s Ethereum. We saw a very interesting trend reversal here back a few days ago – as we were seeing decline in price we were also seeing an increase in volume. But interestingly enough the other day we had a very serious amount of law in fact outpacing the last day of serious sell-side volume. And ever since then not only as it theorems price made a nice steady rebound to be fair. But along with that we’ve been seeing declining volume meaning that the momentum to the sell side might be done. We might have seen the peak of the actual fear and doubt in Ethereum at least in the short term and possibly might be seen a trend reversal. If Ethereum starts to move up you can bet that many of the ERC 20 tokens and some of the other just simple altcoints will follow as well and even faster. 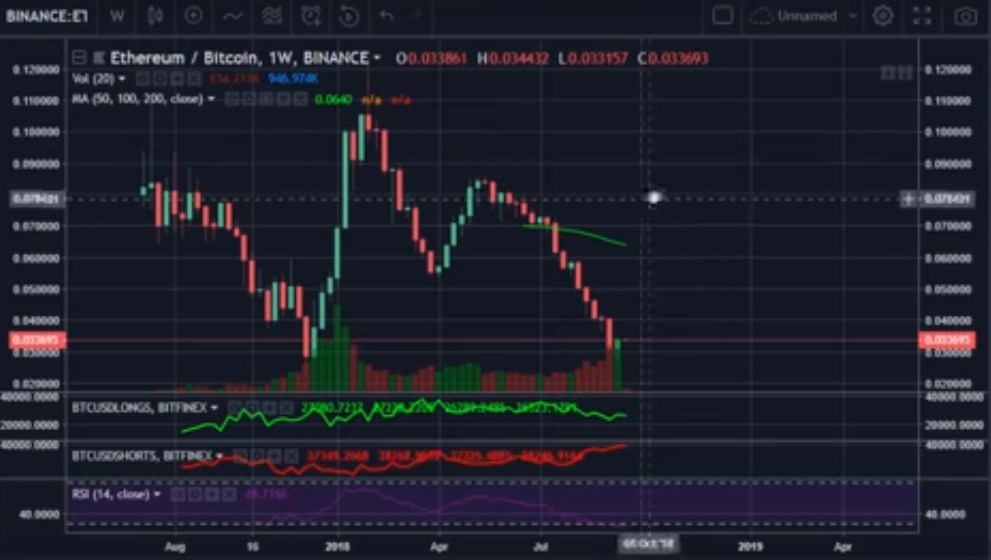 Expert has noticed: “We’ve heard that the CBOE has been talking about ETH future contracts launching since they announced the Bitcoin features contracts”. They’ve been eager to launch these products and get more of these financial instruments into the market. And by the way much like in the Bitcoin futures that carried Bitcoin back in December 2017. It’s very well going to be that if ETH futures contracts serve as a catalyst for whole cryptomarket. “As we’ve seen Bitcoin futures really grow as a successful financial instrument in regards to volume we could very well see the same with Ethereum”. This is something that has been rumored to come out before December. Expert concludes:

– I think the CBOE is showing some concerns. I think the SEC has been relatively clear in their position. But they also want to make sure that the CFTC is in line with the values of it being okay to launch. CFTC has actually been a little bit more optimistic than the SEC. It’s not going to be too difficult to set up the futures contracts they’ve already done it with Bitcoin. It’s a matter of following the same principles and procedures with Ethereum and again they’ve been planning for this for a while. We could also see Ethereum being registered as the security. I think it’s very very likely that in the next month or so we can very well see ETH futures contracts. I think we could see it in October, November or December coming this year. And again this has been reported across a variety of different news sections since back in late August and early September, so I think we’re getting very close to this. We should keep in mind that a theorem could very well be a catalyst not only to help Bitcoin get an aid and some exuberance in price but also for altcoins to get a very well needed balance in the market.

“Buy the rumors, sell the news!” – this is a fundamental principle of the exchange trading. Although this is about the fiat market. But we have already noticed more than once that the crypto i as for the principles of work approaches the traditional market. Perhaps this is temporary and is connected with the arrival of institutions in large scale. But it is so. In this case, rumors pushed to buy. But what will be the facts after September 30?