On July 25, Carry Protocol announced that the crowdsale will start in August. On July 27, the Carry team announced a Whitelist Quiz.

A short quiz will give participation priority to the following: 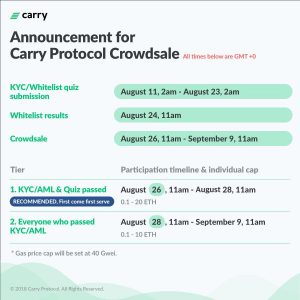 The Carry team notes that KYC/Whitelist quiz is NOT first come first serve.