Unocoin, one of the largest cryptocurrency exchanges in India, is preparing to launch its own line of crypto ATMs. An image of one of the exchange’s machines has been extensively shared on social media since Tuesday.

“It is true that we are launching our ATM machines but we have not made the news public yet. We may need about a week more before we get this operational. Someone has spotted a machine and (they) are spreading the pic and speculation around.” 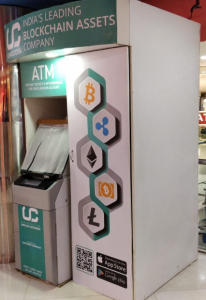 The words “instant deposit & withdrawals for your Unocoin account” are written on the machine, along with “exclusive for Unocoin customers” and “credit & debit cards are not accepted.” There are also logos for BTC, XRP, ETH, BCH, and LTC next to the machine, suggesting that the ATMs support at least the five cryptocurrencies.

Step by step, cryptocurrency ATMs spread all over the world. Earlier Coinstelegram reported that Athena Bitcoin, a U.S. company that specializes in cryptocurrency ATMs, launched Argentina’s first bitcoin ATM last month in a Buenos Aires shopping mall. Another company, U.S.-based Odyssey Group, said of the 150 ATMs it aims to install by the end of the year in Argentina, 80% of those will be bitcoin-operational within the first months of 2019.