Based in Japan, LINE Corporation is bringing together information, services and people. The LINE messaging app launched in June 2011 and since then has grown into a diverse, global ecosystem that includes AI technology, fintech and more. 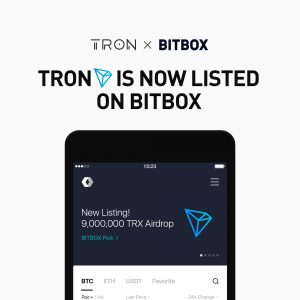 In addition, to celebrate TRON’s listing on BITBOX, 9 million TRON coins will be airdropped to users on BITBOX, in a promotional event running until August 22.

LINE’s subsidiary unblock corporation recently established “unblock ventures ltd.,” a corporate token venture fund. Unblock ventures focuses on token investments and has a capital commitment of $10 million, made by LVC Corporation (another LINE group company). Additionally, unblock ventures’ token fund is expected to expand in the future, according to the growth of the blockchain market.