The MEGA Chrome extension version 3.39.4 has been compromised and can now steal user’s Monero (XMR) in addition to other sensitive information, according to recent posts on Twitter and Reddit.

MEGA Chrome extension is a tool that claims to improve browser performance by reducing page loading times, in addition to providing a secure cloud storage service.

Another user tweeted that the extension can also steal usernames and passwords from Amazon, GitHub, Google, Microsoft portals. 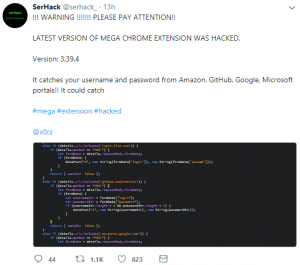 “There was an update to the extension and Chrome asked for new permission (read data on all websites). That made me suspicious and I checked the extension code locally (which is mostly javascript anyways). MEGA also has the source code of the extension on github […] There was no commit recently. To me it looks either their Google Webstore account was hacked or someone inside MEGA did this. Pure speculation though.”

At press time, the MEGA Chrome extension version 3.39.4 is unavailable for download on the Chrome Webstore.