#MetaHash (#MHC) is a next-generation network based on the Blockchain 4.0 technology for sharing digital assets and a platform for creating and managing decentralized apps and services in real-time.

On August 18, the #MetaHash team announced a successful completion of ICO Round A.

“We are grateful to our partners, advisors and especially our community for their trust and support.” 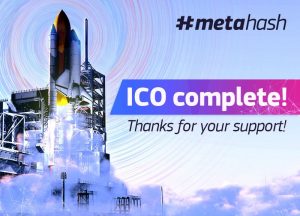 As #MetaHash stated earlier in the White Paper, Round B was planned for the fourth quarter of 2018 after the end of Round A, but could cancel in case of hitting our Round A goals early or replaced with a market offering at discretion of the project.

Since currently Round A is completed and the project awaits the buyout of allocated #MetaHashCoins (#MHC), the #MetaHash team decided to cancel ICO Round B.

The coins earmarked for Round B (10% of total #MHC emission) are moved to a Reserve pool to be used for business development and strategic partners. The #MetaHash team will make the final decision on the timeframe and ways of use of the Reserve later in accordance to the market’s requirements and #MetaHash needs.

In case of putting #MHC on the markets, the coins from the Reserve formed after Round B’s cancellation will be vested for two years following first cryptocurrency exchange listing, with 25% of Reserve pool becoming available to the #MetaHash team for use every six months. Also the coins out of the Reserve will not participate in forging before the point of purchase or a reward payment.