NEO (NEO) is a non-profit community-driven blockchain project. It utilizes blockchain technology and digital identity to digitize assets and automate the management of digital assets using smart contracts. Using a distributed network, it aims to create a “Smart Economy”.

CertiK (CTK) is a formal verification framework to mathematically prove that smart contracts and blockchain ecosystems are bug-free and hacker-resistant.

On August 1, NEO announced partnership with Certik, formal verification platform for smart contracts and blockchain ecosystems, to enhance the security of its platform. Apart from smart contract verification, security auditor CertiK will also provide a tailored solution to verify NEO’s digital assets and digital identity. The collaboration between the two is in preparation for the smart economy revolution. 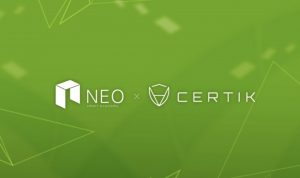 When a logical language is used to describe a specification, Certik applies a rigorous mathematical deduction to check whether a given system code meets the requirements. This formal verification framework mathematically proves that smart contracts and blockchain ecosystems are bug-free and hacker-resistant. Currently, most of the smart contracts and dApps on the NEO platform are developed by individuals. In this development system, formal verification is crucial to rule out potential loopholes.