nOS (NOS) is the Virtual Operating System for a new, transparent internet. Powered by the NEO Smart Economy.

On November 9, NOS was listed on decentralized exchange Switcheo. Users can trade NOS with NEO, GAS and SWTH.

Additionally, Switcheo announced nOS trading competition from 12th November to 25th November 2018. Users have a chance to win from a pool of 100,000 NOS. 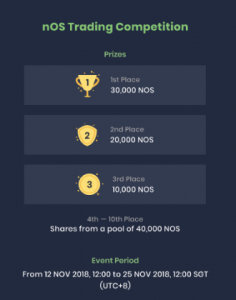 Registration is required for this event. The exchange will share more details on the registration soon.

Switcheo Team reserves the right to cancel or amend the competition and competition rules at our sole discretion.