Pchain (PAI) is the first native multichain system that supports EVM in the world and it makes large scale blockchain applications possible.

On November 7, the Pchain team announced they had decided to postpone unlocking the team tokens. 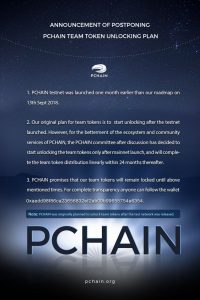 In today’s announcement, the Pchain team says that team tokens will be unlocked only after the mainnet launch and will be distributed within 24 months.