The topic of a Bitcoin ETF has become hot over the last few weeks. Quite a lot of them are in the pipeline, waiting for approval, but it seems that everyone is looking at the CBOE-backed VanEck/SolidX proposition.

A lot of applications for cryptocurrency-related exchange-traded funds (ETFs) have been filed throughout the last year, many of which still await any development.

On July 31, a popular cryptocurrency trader and host of CNBC’s Cryptotrader show Ran Neu-Ner shared a list with the applications and their respective statuses. 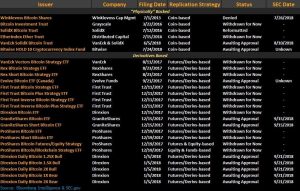 The wide majority of applications are either awaiting approval or have been withdrawn, with only the Winklevoss-proposed listing of the Winklevoss Bitcoin Fund on BATS BZX Exchange being formally denied.

Despite the SEC’s skepticism, attested in the rejection of the Winklevoss Bitcoin ETF application, many hold that the one proposed by CBOE has strong chances of getting the go-ahead.