In his 72 John David McAfee has his own emotional and philosophic view of crypto market. Most interesting ever!

I’m interested in one thing and that is personal freedom. I’ve managed to free myself as much as a human can under the restrictions of the existing pyramidal power structure which is based on permission and based on force. Let me give you an example of what the blockchain can do. If the blockchain had existed since the beginning of time – we would have a pretty different history! Because history is the story written by the conquerors. It is now the true beginning recorded history 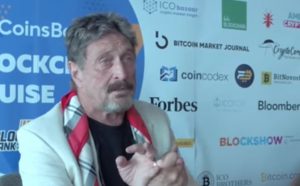 So now in the existing power structure if somebody does something wrong, illegal what happens? We send in the police if we find out about it, we have legislation, we have regulations and we exert – what? Force! Now we’re having a struggle with one of the exchange is called HitBTC. They are obviously a criminal organization; they’re stealing people’s money – end of story. Now we have that person who says – they’re stealing my money. And HitBTC which says – Nothing ever, we don’t know where they are, what country they’re in – nothing! So what do we do? We have a record of the truth that is on the blockchain so what we do? We just all know the truth, we all accept that truth. If you know that if you send your money to HitBTC they’re likely to either steal it or keep it for months doing God knows what with it before they give it back. Are we going to use it? No! What happens to HitBTC? They disappear, they no longer are an issue. Do we need to send in the police? Of course not! Now you may say – but who’s punishing them? What we did by just not using them? The market! The market punishes them we – don’t! Why do you care if the lion eats the gazelle? And every time a gazelle goes into a specific field lions eat them. This mark you could say – listen, don’t play with lions! They will eat you! Let’s eat over in this other field! So all we need the truth and the willingness to accept responsibility for our own actions and the understanding that nobody else can protect you when someone breaks into your house, puts a gun to your head. Where’s that magic button that you push, that makes the policeman materialize between you and the aggressor? It does not exist! Regulations do not protect; they are designed to control! 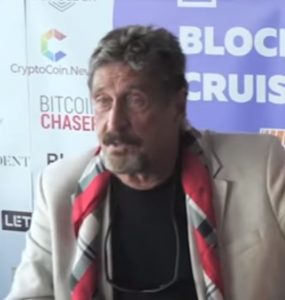 Life is not a safe affair. If you think – it is – you’ve had your eyes closed your entire life. Because it is not. In the end realize that there is some reality. coming home to the roost. You must accept that, always! You invest in a market, you see, Good God, crypto! Look at what happened to bitcoin that went from fifteen hundred dollars to twenty thousand in a year. Wonderful! Throw your money in there twenty thousand! Well now it’s down to six. Accept that! That doesn’t mean that you’ve lost anything, it merely means, that your expectations for short-term game just didn’t come true! Didn’t come true! So – accept the truth of your actions. You make it, you make a decision, you bear the brunt of it. No one else does. You can say – well, someone said it’s gonna go! Who cares what someone said? Someone buy that for you and give it to you? No – you did!