Here is the opinion of Sylvian Ribes, a trader and investor.

Sylvian Ribes believes more than $3 billion of all cryptoassets’ volume to be fabricated, and he will endeavour to prove it by analyzing publicly available data.

When he set out to datamine for this piece, he had no idea he would end up talking about fake volume. He initially meant to gather data about cryptoassets liquidity, that could be a complement to volume.

He decided his metric of choice would be to collect orderbooks from all major exchanges, and to measure how badly market selling $50k USD worth of each cryptocurrency would crash the price. Throughout this article, he will refer to this number as “slippage”. He would later refine his slippage metric by selling more or less on each exchange depending on the volume they processed, and changing the sold amount with regards to the currency market cap.

He expected that slippage should be a decreasing function of volume, but that some differences might show from one currency to another. After all, if you have a gargantuan volume on a given pair, there has to be a very high competition between market makers to satisfy the buyers and sellers. And that kind of competition is bound to densify orderbooks and reduce spreads.

It turned out this was the obvious tendency. But where he had expected mild differences between currencies, he found ridiculously massive discrepancies between exchanges. Not the kind that can be easily hand-waved away, but the kind that can only be explained by some figures being overstated as much as 95%.

Leading the pack is OKex, currently ranked #1 exchange by volume with $1.7b total volume on both CoinMarketCap and LiveCoinWatch websites.

OKex is a ghost town

A bit of wash trading and artificial volume inflation is to be expected in an unregulated market. What he did not expect was the magnitude of the fraud. Consider the following chart: 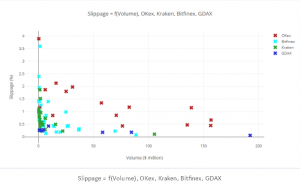 It’s a representation of the average slippage and volume of all pairs among a selection of a score of cryptocurrencies with a daily volume over $100k over four major exchanges: OKex, Kraken, Bitfinex and GDAX, over the course of 24 hours.

For example you may read that the blue dot at the bottom right represents a GDAX pair, with a volume close to $200m, and a slippage of less than 0.1%

The chart is striking. It shows how, although all first three exchanges seem to behave rather similarly, OKex pairs, in red, all have a massively higher slippage with regards to their volume. This can only mean that most of the volume OKex claims is completely fabricated.

Besides, for legibility’s sake, he elected to remove from the dataset all slippage data over 4%. Reintroducing the ignored data paints an even more absurd picture of OKex traffic, and requires a logarithmic scale: 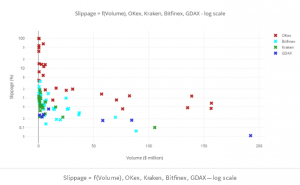 Many pairs, albeit boasting up to $5 million volumes, would cost you more than 10% in slippage, should you want to liquidate a mere $50k in assets. Those pairs included, at the time of the data parsing (06/03/18): NEO/BTC, IOTA/USD, QTUM/USD. Hardly illiquid or low-profile assets.

Although those numbers alone prove to me without the shadow of a doubt that a suffocating majority of OKex volume is fake, he had not witnessed first-hand how they implemented it. So he logged into their platform and had a look at some pairs trading history. And indeed, they fake their volume in an obvious and artificial way: 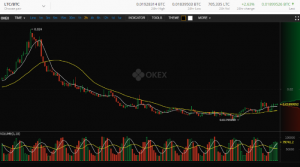 Compare this perfectly neat and absurdly consistent sinusoidal volume with what happens on an actual exchange: 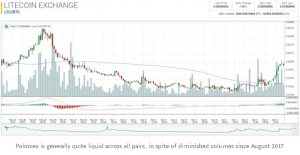 Dips, spikes, snowball effect on higher volatility. Not a chart out of a high school oscilloscope.

Sylvian Ribes doesn’t believe OKex engineers actually reflected upon ways to make washtrading less conspicuous than a straight constant stream of trades, but all they could come up with was a perfect sine wave.

How bad is it?

As obvious as it is that most of OKex’s volume is doctored, how do we go about estimating whether it’s 90%, 95%, or 99% fake? And Ribes proposes the following method:

To that effect he used data from the following exchanges: Bitfinex, GDAX, Poloniex, Bistamp, Gemini and Kraken. Given the volatility of the dataset at lower volumes, he also decided to change the metric he used: instead of a $50k marketsell, he simulated a $20k one.

Here is what the data from the trusted exchanges looks like, this time showing volume as a function of slippage: 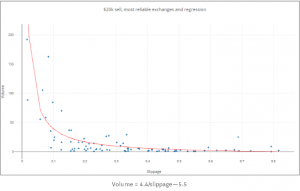 You can see that due to extremely volatile data, any model becomes absurd when slippage exceeds 0.7%. The one proposed above is the best fit I came up with for slippages below 0.7%. Over this threshold, the only reasonable assumption is that the expected volume is most likely under $1M.

As you can see when plugging-in legible OKex data on the above plot, something is definitely not quite right: 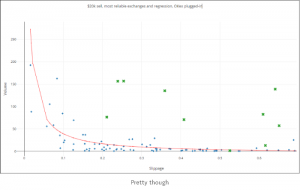 Out of 28 pairs on selected currencies with volumes over $100k, only 11 have a slippage under 0.7%. They are as follows: 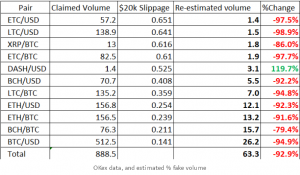 The total proportion of faked volume on these pairs would, according to this model, amount to a staggering 93.6%. The discarded pairs (slippage > 0.7%) would not significantly alter this number one way or the other.

Arguably, the regression he used could not be very accurate on very high volumes, for lack of a robust dataset. It only seems fair, then, to discard the BTC/USD pair. Still the number remains high: about 92.9% off all OKex’s volume is most likely fabricated.

Similar to OKex, Huobi shut down following China regulatory crackdown, to better re-open later under the Huobi.pro licence. Following the same methodology, here are the results: 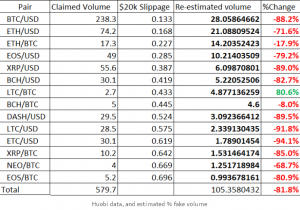 A quick glance at their trading history easily confirms that although the volume appears much, much more organic than OKex’s, there still exists a strong background of constant low-key wash trading: 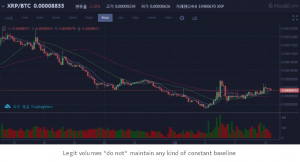 CoinMarketCap has quite recently listed a host of Chinese trading exchanges that all boast rather high trading volumes but somehow, no one has ever heard about. Most of them obviously share the same User Interface and trading engine.

Among them, but definitely not limited to, are names such as: Lbank, Exx, RightBTC, CoinEgg, Zb, BitZ, Bibox, CoinEx, BTC-Alpha…

Those platforms are so blatantly faking their volumes that they do not even deserve running numbers.

For a variety of reasons, Ribes had suspicions about two leaders in the altcoin space, HitBTC and Binance. Here’s how they fare against his set of “respectable” exchanges: 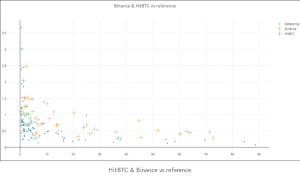 It’s easy to see that, for a given volume, both exchanges, especially Binance in orange, appear significantly less liquid, and as such, suspicious.

Here is the same analysis he did for OKex and Huobi before yields the following results. First for HitBTC: 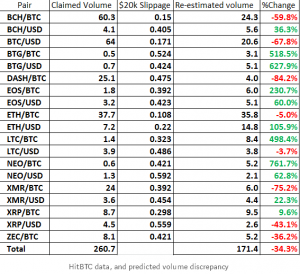 These numbers cannot be deemed significant. Although they prove that HitBTC is slightly less liquid than the reference exchanges, such a small difference between claimed and re-estimated volumes can stem from a number of reasons, including mere variance.

Binance results are the following: 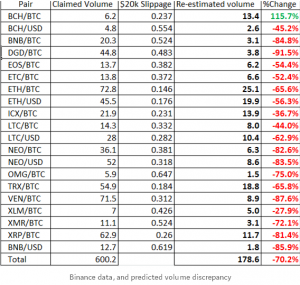 A 70% difference with his mathematical prediction is worrying. But it serves to remember that the input of the model is slippage in a given trading pair, which is not entirely endogenous to sheer volume.

Sylvian Ribes says that Binance has a pretty restrictive policy when it comes to API-trading. He spent some time debating them how he believed such rules to be utterly stupid, as they would only hinder their exchange growth and liquidity.

Because of these restrictive trading rules, it is quite likely that many people running market making strategies across several exchanges would be reluctant to implement the same strategies on Binance, as they would constantly get banned without ever knowing the actual limits they should not have crossed.

With fewer professional market makers, it is easy to see how orderbooks become thinner and the hereby introduced model might be completely off. It could however serve well to keep a close eye on Binance claimed volume in the future, although inspecting their volume history does not show any obvious suspicious activity.

While Ribes has virtually no doubt about his claims, he says the numbers should not be taken at face value. Here are a few reasons why:

According to Ribes, over $3 billion dollars of daily volume is nonexistent. Possibly more. Yet somehow, the practice is, if not encouraged, at least thoroughly ignored by popular data aggregators and most of their users, when all anybody really has to do is have a look to figure out that something is amiss.

Cryptoassets are in a dramatic bear market at the moment, following the bullish frenzy of 2017. Ribes believes that growth cannot resume until we have achieved a sound enough trading environment. The ecosystem market cap and awareness have blown way past the point when we could afford to allow such blatant manipulation.

Ribes says that crypto needs regulation, because the current state of crypto is arguably a testament to the failure of the free-market.

Canada prepares to release its own digital currency

Three is better than one: Why going cross-chain will be a huge milestone for NewsCrypto

The Most Extensive Ecosystem to Grow your Digital Assets

Greetings to all Powerful Women of the Year 2021