There are some extracts from Chapter 9 of the Report Of The Joint Economic Committee Congress Of The United States in the article. This chapter is called «Building A Secure Future, One Blockchain At A Time»

THE YEAR OF CRYPTOCURRENCIES

Many significant economic events stand out in 2017—passage of tax reform, regulatory reform, the continued drop in unemployment and the emergence of cryptocurrencies should be listed among them. Sensational headlines and intense fascination drove «Bitcoin» to second place as a global news topic in Google’s Year in Search 2017. «Bitcoin» searches skyrocketed, and «blockchain» and «Ethereum» moved out of relative obscurity.

In addition to the surge in searches, the price of many cryptocurrency and blockchain assets skyrocketed.Yet, while both stock market measures experienced strong growth, cryptocurrencies dwarfed their performance.

The buzz surrounding digital currencies resembles the internet excitement in the late 1990s when people recognized technology companies could change the world. Many internet companies launched and their valuations took off in short order. Many failed, but a few succeeded spectacularly and challenged the conventional ways of doing business. A company that did eventually succeed is an online book retailer called Amazon.com, but along the way its price gyrated with stock splits and recessions.

Surging prices also drove up cryptocurrency market capitalization. At the beginning of 2017, the total value of all bitcoin in circulation was almost $15.5 billion, but by year’s end it increased almost 14-fold to over $216 billion. Other cryptocurrencies such as Ethereum, Ripple, and Litecoin experienced similar gains. Ether’s total circulating value multiplied by 98 from just under $700 million to over $68 billion. Ripple’s market cap multiplied by an even larger 342 from $237 million to over $81 billion. Finally, Litecoin lost its position as the third largest cryptocurrency in 2017. It still grew robustly but increased to just 55 times its original market cap of over $212 million, to well over $11 billion.

WHAT ARE CRYPTOCURRENCIES AND BLOCKCHAIN ?

Blockchain is the distributed ledger technology that underlies digital currencies such as Bitcoin. A ledger is the accounting tool that tracks the movement of money from one person or account to another. Conventionally, such records are stored in central locations like banks, headquarters, and Paypal servers. Blockchain revolutionizes ledger technology with a network of distributed ledgers. Instead of one central, authoritative record of all transactions or information, blockchain creates potentially thousands of identical ledgers in computers and servers all over the world.

In «permissionless» proof-of-work blockchain, people compete to validate each transaction in return for a reward. The protocol rewards users for creating and validating entries into the ledger. This reward creates an incentive for competition and gives these validators («miners» – Box 9-1) new tokens to use in the system. Users who do not earn tokens by performing verifications, i.e., not  «miners», must buy the tokens. This interplay between miners and purchasers create an ecosystem where people have clear incentives and rewards to maintain the distributed ledger for everyone. 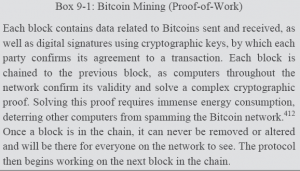 Bitcoin was the first blockchain. Bitcoin’s network creates a new record of verified transactions approximately every ten minutes and packages the records into a so-called «block». Ethereum is the second-largest cryptocurrency in the world, and though it uses the same blockchain technology as Bitcoin, it serves different purposes. While Bitcoin’s blockchain records each transaction in

its currency, Ethereum records results from the programs users upload to its network. It allows programmers to create applications and «smart contracts» that utilize computing power from Ethereum’s network to execute them. This brings the decentralized security of blockchain to computing power, while allowing developers to build applications, smart contracts, and other digital coins on top of Ethereum. Additionally, it uses the same proof-of-work mining that Bitcoin does, but its network produces a block every 12 to 15 seconds and rewards its miners three ethers per block, with additional rewards for solutions found but not included.

Blockchain technology could compete with existing mechanisms, goods, and services. Its initial application as a payment medium prompted questions about whether it might replace national currencies and challenge the U.S. dollar. Currencies serve three functions: medium of exchange, unit of account, and store of value. A currency will not be the only store of value in an economy. Many items can potentially store value, but money normally maintains relatively stable purchasing power over time and individuals expect it to remain an acceptable medium of exchange in the future.

At this point, many prominent economists do not believe cryptocurrencies fit the standard definition of money. Former Federal Reserve Chair Janet Yellen considered Bitcoin a «highly speculative asset» that is not considered legal tender.Bitcoin itself has technical and economic limitations that hinder its use as a medium of exchange. Transaction processing time and fees on the Bitcoin network keep increasing and render Bitcoin uneconomical for common purchases. Bitcoin’s current design can only process about seven transactions per second, while Visa or Mastercard can process thousands. The debate over scalability deeply divides the Bitcoin community. Ethereum experienced similar problems, but underwent a planned and substantial upgrade in October of 2017 that improved its processing time.If Bitcoin or other digital currencies can improve their underlying protocols or find off- chain solutions, they could speed up processing time and reduce transaction fees.

Extreme volatility in the dollar price of cryptocurrencies also impairs their use as money because people price goods and services in dollars and thus their purchasing power fluctuates wildly. In order to value items in terms of bitcoin, ether, or ripple, the dollar exchange values of these units would have to stabilize. The dollar loses about two percent of its value per year due to inflation, but its purchasing power loss is modest and predictable so people can incorporate it in their decisions. If digital currencies become less volatile in the future, valuing items in those denominations could become easier and individuals might begin using them more frequently as a medium of exchange.

A new market formed around blockchain startups, called Initial Coin Offerings (ICO). An ICO allows developers to raise funds for a project by issuing tokens to use on that project. For example, if a group of economists wants to exchange papers, research, analysis, and review or editing services, developers would  create an online platform to allow each person to have an account for conducting these activities. Before blockchain, such a site would usually use outside payment systems such as Paypal or Visa to process transactions, but in this example, users could transact with hypothetical scarce tokens called EconoCoins.

The second element would be a «smart contract». With smart contracts, a program enforces the contract built into the code.

An ICO consolidates two important elements of building a new economic ecosystem, obtaining funding and creating a network. ICOs do not offer equity and are much less expensive than an Initial Public Offering (IPO).

Blockchain technology offers a decentralized, secure, and efficient way to store almost any form of data across multiple platforms. Developers, companies, and governments recognize the potential and have already starting to implement blockchains for many different uses.

The potential for theft remains a problem but not due to the structure of blockchain. No evidence exists of anyone hacking blockchain’s underlying protocol, but digital currencies are still vulnerable to theft. Users keep their currencies on digital «wallets» stored as files on a computer. For many, this could be a technical barrier deterring them from directly using the tokens. Centralized exchanges and internet services emerged to solve this hurdle where users could buy, sell, and store their virtual currency on that site. However, using an exchange to store ones’ digital assets increases the risk of theft. When individuals keep their digital asset in a single «wallet», the only way to access it is by knowing their private key. But with online exchanges that pool multiple assets into much larger «wallets» to facilitate trading, many people will have access to those funds.

Cryptocurrencies, ICOs, and their exchanges present novel regulatory challenges. Their rapid ascension led to instances of new products running afoul of America’s current regulatory framework. This demonstrated how certain regulatory environments are simply out of touch with the internet age. The market expanded with a light regulatory touch, but its explosion in 2017 and the well-publicized nefarious actions in this space prompted regulators to act. Further, American regulators spent years convening working groups, watching developments, and conducting research to ensure they understood how these

technologies operated and how they could be regulated. Rather than covering the plethora of regulatory challenges cryptocurrencies and blockchain present, this Response will focus on securities regulations, money transmission laws, taxation definitions, and possible future regulatory action.

Solving the challenges cryptocurrencies and blockchains present will require unique solutions that balance the needs of consumer protection, security, and entrepreneurship. While it is impossible to determine precisely which rules, regulations, and guidance will result from this process, one thing is certain. Regulatory agencies will need to coordinate to ensure they do not work at cross purposes.

Technology presents evolving challenges and generates new solutions. Blockchain technology essentially stores and transmits data securely, in large volume, and at high speeds. So far, the technology has proved largely resistant to hacking, and given this feature, developers first applied it to digital currencies. Yet blockchain has many more potential applications, such as portable medical records and securing the critical financial and energy infrastructure.