A cryptocurrency startup Savedroid appears to be a scam.

On Wednesday, the website for the German company unexpectedly went offline and has since been replaced by a single image — the «Aannd It’s Gone» meme, which first originated on South Park. 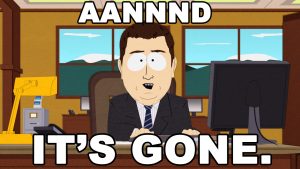 Yassin Hankir, the founder of Savedroid, published a Twitter post that showed him in an airport and later on a beach, holding a beer.

«Thanks guys! Over and out…#savedroidICO», – he tweeted. 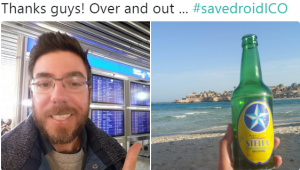 The Savedroid is estimated to have raised about $50 million, through its ICO as well as external funding.

Purportedly, the company was building a savings app that would use artificial intelligence (AI) to help users automatically invest in curated portfolios of cryptocurrencies and related derivatives. Savedroid also claimed that it would produce a cryptocurrency-funded credit card.

The most recent post in Savedroid’s social media account is from April 15, and it advertises a social media marketing internship with the company. Moreover, Hankir had live streamed a Q&A session less than a week ago, highlighting how unexpected the incident was for investors.

Barring the off chance that this is an ill-conceived publicity stunt, it seems that Savedroid has become the latest startup to exit scam at the conclusion of its ICO, now that it has customer funds in hand.