News of the day – Tether losing, bitcoin surging. Why? What for?? What to do???

This is panic. And below – how it works.

It started as many things – on the East. During the early Asian sessions BTC jumped from $6300 to $7600 and even higher. And simultaneously Tether (USDP) dropped below $0,9…

Lot of so called armchair analysts hurried to flood the Internet with their opinions and forecasts.

It is known that stablecoin Tether is closely tied to BitFinex. So it shows the largest grows. Expounders claims:

– The spread between one exchange (Coinbase) and another one (BitFinex) is up to $751 – that’ s a crazy spread. Absolutely top spread is $977 – it’s more than crazy!!! Interesting thing is that percentage that we see Tether fall is the same percentage as the spread percentage. Obviously this is close correlation between Tether price and bitcoin pumping on BitFinex.

Why to be surprised, guys?

BitFinex lately has dropped Noble Bank as its banking partner. The amount of US dollars required to back the Tether’s USDT token supply were deposited in this bank. Step by step – new guesses appeared on the surface. That Tether had no money to back its total supply. That there is a strong connection between the chiefs of BitFinex, Tether and Noble Bank. That Puerto Rican regulators have concerns about the bank – and so on.

So we have now what we have. The only logical conclusion is that people are panicking about the Tether. And they are buying bitcoin in panic. Which is most stable cryptocurrency. And right now we are going to see the collapse of Tether. Are we? 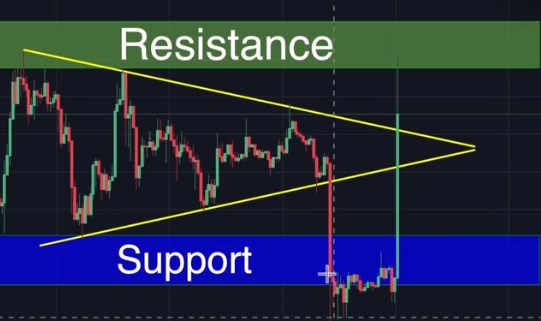 – What we are witnessing right now that people actually fleeing and panicking out of Tether and panic buying bitcoin!

Sure! And you know what? We see at the same time that TrueUSD (TUSD) – another stablecoin backed by USD – is up at about 11%.

You surprised again? You never heard of a stock market game? About Pump&Dump?

That is – really surprising!

Some charts from CMC: